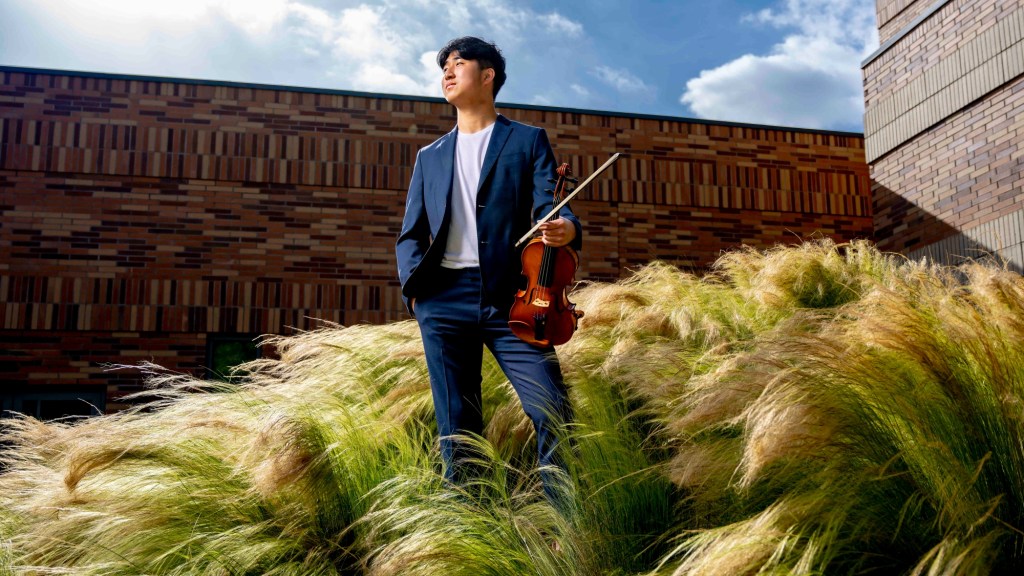 The moment is something Aaron Kim says he will never forget.

At the suggestion of his mother, the violinist began performing in 2019 at St. Jude Medical Center as a volunteer with the hospital’s lobby wards, surgical waiting room, and music therapy program. He had already visited rest and retirement homes.

Kim recalled how, in his second week at St. Jude, he finished a Bach piece when an elderly woman in a wheelchair approached him and held his hand. She said, “Don’t waste this.

He thought about what she meant. The talent? The opportunity? He expected to see her again the following week, but she did not return. He later learned that she had died.

This story and what it stands for – her heart and passion – was one of the reasons the judges named 18-year-old Kim Artist of the Year for Instrumental Music.

“He really saw a path for himself,” said David Scott, adjunct professor at Chapman University’s conservatory of music.

Gary Gopar, head of the music department at Cypress College, commented on what he called Kim’s “star power.”

“However he uses it, if he sticks to it, he will succeed.”

Kim, a senior at Valencia High, had started playing the piano at age 5 and started performing at a young age. He had a talent for it, but no real passion. “All I focused on was hitting the right notes and getting the performance over with,” he wrote of himself.

But then, still young, his mother took him to an introductory violin lesson. Walking through a huge hall, “I heard the beautiful sound of a man playing hymns on the violin.”

From the first time Kim learned to hold the bow, her path was set. “I remember wanting to make music and being inspired to do it.”

He placed first or second in a variety of solo and ensemble competitions. He has been first violin of the Sinfonia Orchestra of Valencia since his second year and has also been a conductor during rehearsals.

Playing the violin brings him joy and calms him. Especially the music of Johann Sebastian Bach.

“Bach,” he told the judges, “is like my therapist who is available 24/7. And he doesn’t charge anything.

Kim isn’t shy about reaching out to those he can learn from. Out of the blue, he said, he decided to email a violin professor at Vanderbilt University’s Blair School of Music. Professor Cornelia Heard responded by meeting him in a few Zoom sessions.

Kim plans to double major in music and psychology. He is an only child whose parents give him loving advice and support. His father, he says, gave him this sage advice, words similar to what the old woman from St. Jude shared with him:

“Failure is only failure if you decide to give up.”

Jazz: Max Nguyen, 17, senior at Los Alamitos High. In addition to his drums, Nguyen brought in a bassist and piano player to play Cole Porter’s “What Is This Thing Called Love” and Wayne Shorter’s “Adam’s Apple” for the judges. He talked about Chick Webb and Gene Krupa. But his awareness of jazz’s roots — stretching beyond New Orleans in the early 20th century to enslaved African Americans — particularly impressed Gary Gopar, who leads the jazz band at Cypress College. “It blew my mind,” Gopar said.

Piano & strings: Angela Lee, 17, senior at Pacific Academy. She sat quietly in calm calm at the piano for long seconds before her hands moved gracefully to the keys. He is someone who invests himself in his art, and not only on the piano. Two years ago, Lee co-founded the Opus Music Foundation, a non-profit organization to train young musicians and help them become well-rounded artists through free master classes and competitions. His thought: “Why don’t we all have the same opportunity?”

Winds & percussion: Esther Kim, 18, Woodbridge High School. His instrument, the clarinet. Two of them – an A clarinet and a Bb clarinet. Music, classical concertos. The response to her performance by Jim Kollias, musical director of Beckman High? Applause. “You have such a presence,” Kollias, himself a clarinetist, told him. She wanted to go to UCLA to pursue a musical education. She entered, planning a career as a professional musician and music teacher.

World/cultural & commercial music: Miguel Angel Tiscareno, 16, junior at Capistrano Valley High. His joy in playing the Mexican music of his heritage – corridos, norteños, polkas and cumbias – leapt from his accordion and from the lyrics he sang in Spanish. “I love this music,” he said. “I love how it goes back to my roots.” He performs at birthday parties and religious gatherings, quinceañeras and weddings. Also trained in piano and violin, Tiscareno aspires to become a musical director. And to write and preserve the music of his culture.

The MCHS Instrumental Music Department will perform on February 27 | local…