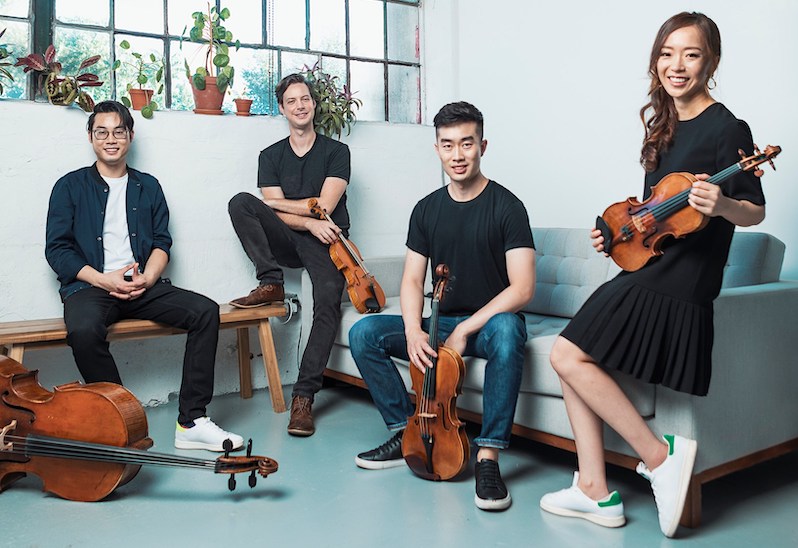 South Berkshire Concerts will resume performances at Bard College in Simon’s Rock on Sunday, February 27 at 3 p.m. with the Rolston String Quartet. Photo courtesy of the artists’ Facebook page

GREAT BARRINGTON — After a 27-month hiatus, South Berkshire Concerts, the series of guest musicians at Bard College at Simon’s Rockwill resume performances on Sunday, February 27, at 3 p.m. at the McConnell Auditorium at the Daniel Arts Center. The concert will feature the Rolston String Quartet, a young Canadian ensemble that has won prestigious awards both at home and abroad. They will perform a program of works by Haydn, Mendelssohn and contemporary Peruvian-American composer Gabriela Lena Frank. Two Haydn string quartets will be performed, proof of their plan to record the 83 works of the composer generally considered the father of the string quartet genre. The concert will be open to the public, who must present a vaccination certificate at the entrance and attend fully masked. Admission is free and reservations must be made online. For more information, call 413-528-7212.

The Rolston String Quartet was formed in 2013 as part of the chamber music residency at the Banff Center for Arts and Creativity. They are named after Canadian violinist Thomas Rolston, founder and longtime director of the Banff Centre’s music and sound programs. The original members graduated from the Glenn Gould School (GGS), and it was at the GGS that they founded their passion for chamber music and, under the guidance of Barry Shiffman, focused their artistic growth and playing. overall. Current members of the quartet are Luri Lee and Jason Issokson, violins; Hezekiah Leung, viola; and Peter Eom, cello.

The second annual Stockbridge Ice Festival will be held on Saturday, the winter exhibition is now in sight

STOCKBRIDGE – The Stockbridge Library, Museum and Archives will present the second edition Stockbridge Ice Festival to Saturday, February 19 from 10 a.m. to 2 p.m. on the library lawn. This event is free and open to the public.

Local ice sculptors will shape solid blocks of ice into sculptures, and guests can view a historic display of ice-harvesting tools from a collection donated to the museum by descendants of the Scheneyer Ice Company, a Stockbridge company which operated from the late 19th to mid 20th century. Ice harvesting expert Dennis Picard will also be on hand to discuss the history and process of harvesting ice for trade. Crafts for children will be offered by the Library’s youth service.

About Ice Sculptors: Bill Covitz is the owner of Ice Matters™, an ice sculpting business he opened in 1999. He has won several awards for his work and is known for creating ice instruments on top of a mountain in Norway. David Barclay enjoys sculpting animals including baby elephants, sea creatures, penguins, dinosaurs and dragons. Dave Rothstein is an internationally renowned snow sculptor who has been carving snow for nearly two decades in the United States, Canada, Europe, South America and Asia.

Stockbridge Library also recently opened the exhibition “Rushing through the Snow: Snapshots from Stockbridge Winters, 1906-1907.” The exhibition is free to the public and will be visible until April 30.

More than a century after they were taken, the photographs in “Dashing Through the Snow” offer candid views of sledding adventures, social gatherings, “barge parties” and scenes at Bonnie Brae, a Victorian mansion and , at the time the private residence of Mr. and Mrs. Henry Ivison Parsons. The photographs were reproduced from two photo albums donated to the Great Barrington Historical Society and recently transferred to the Stockbridge Library. The exhibit also includes items on loan from the Berkshire County Historical Society to Herman Melville’s Arrowhead.

LENOX — Constructionthe leading not-for-profit provider of affordable housing and support services to South Berkshire County residents in need, is now accept applications for two three-bedroom, one-bathroom homes at 8 and 10 Hynes Street in Lenox, for $254,000. Construct runs the housing lottery for the Lenox Affordable Housing Trust, which is limited to first-time buyers at 80% or less of the area’s median income. Applications must be sent by 4 p.m. on April 25, 2022 and the lottery will take place on May 2.

8 Hynes Street is a 1,168 square foot two story home on 1/10 acre near downtown Lenox with three bedrooms, one bath and brand new kitchen. 10 Hynes Street is a 1,550 square foot, three bedroom, one bath with new kitchen, also on 1/10 acre. Applicants must be pre-approved for a mortgage before submitting their applications. Information sessions are Friday, February 25 at noon and Monday, February 28 at 7 p.m.

Applications and questions can be directed to applications@constructberkshire.org.

Registration is now open for the Institute of Trustees 2022

The IFT starts on April 11 with a keynote address by Dr. Kenann McKenzie, director of the Generous Listening and Dialogue Center at Tufts University’s Tisch College of Civic Life. The Center, opening in spring 2021, serves as a hub and educational resource for the Tufts community to promote authentic dialogue and generous listening across differences.

Participants can register for any number of 25 workshops in total, taking place from April 12–May 26which will cover topics ranging from strategic planning and fundraising to diversity and board development.

Registrations will be accepted at a preferential rate of $110 until March 11. After that, registration will cost $130. Full board registration is available for $500.

A sample of planned workshops include: