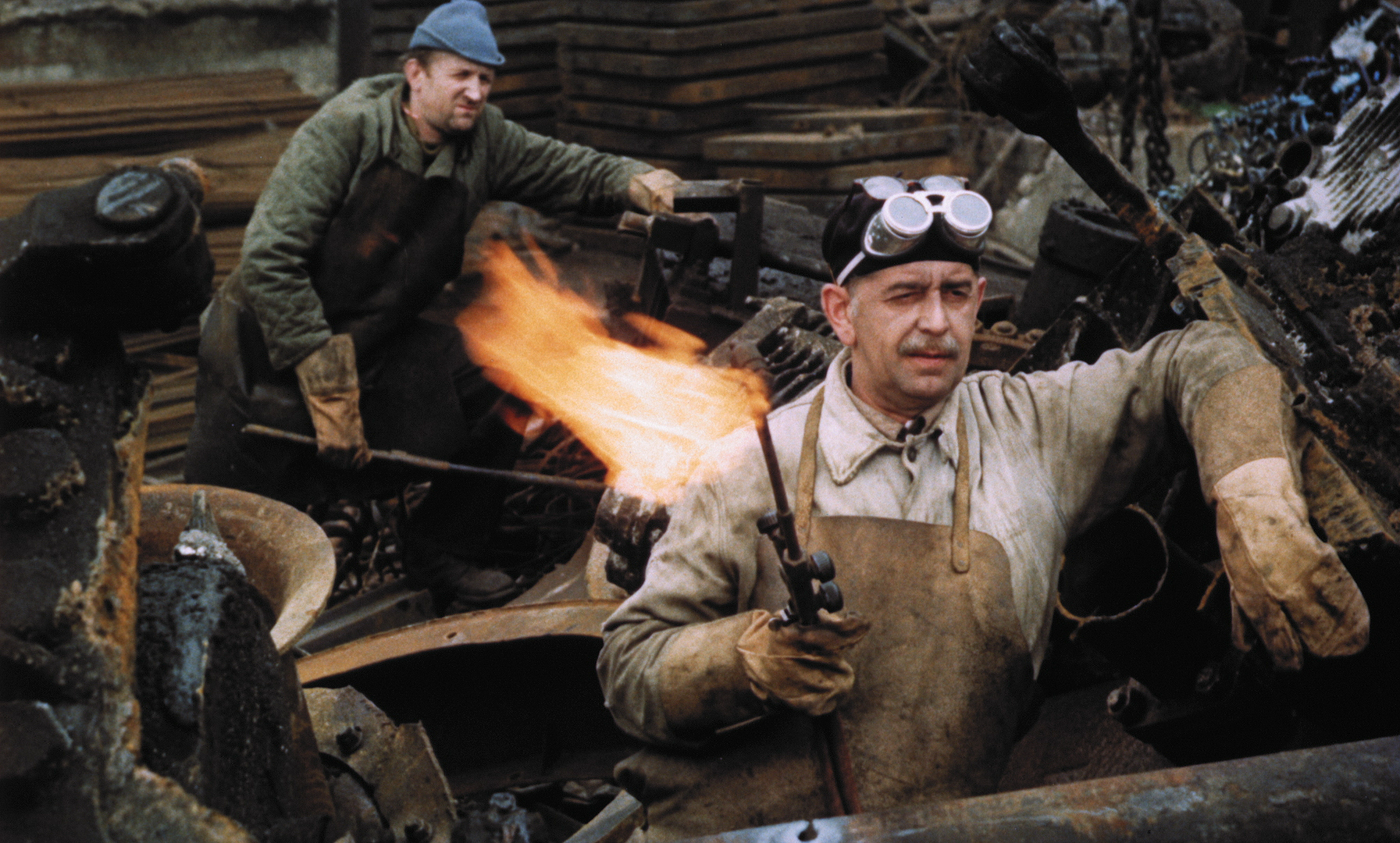 Blu-ray: Larks on a String

At Jiří Menzel’s Larks on a string (Skřivánci na niti) was in production as Soviet tanks slammed into Prague in August 1968.

Predictably, the film was banned by the new Czechoslovak regime and remained unreleased until 1990, although illicit video copies circulated for several years before that. Like Menzel’s Oscar winner Closely monitored trains, Larks on a string was inspired by the writings of Bohumil Hrabal, Menzel and Hrabal’s screenplay here based on a collection of short stories written in the 1950s. Set in the industrial town of Kladno, Hrabal’s characters are dissident members of the Czech middle classes d after the war, sent to a scrap yard to be “re-educated” through manual labor. There is a philosopher, a librarian and a saxophonist whose instrument was abolished by the communist authorities. “Catch up and overtake!” proclaims a propaganda poster, and much is said about the meltdown, the various “leftovers of the vanquished classes” in need of metaphorical merging and recasting.

Rudolf Hrušínský’s union foreman, obsessed with bodily cleanliness, tries to oversee the proceedings, insisting on his working-class origins despite his impeccable suit. A nervous, unofficial guard (Jaroslav Satoranský) watches impassively. The prisoners are separated by gender, friendships and flirtation between them giving Larks much of its heat. Baker Pavel (Václav Neckář) falls in love with Jitka Zelenohorská, their possible marriage is just a sham. As the Guard marries his Roma wife but struggles to consummate the marriage, his wife repeatedly hides from him in their new apartment. At one point, she’s perched atop a cabinet.

There’s a wondrous moment when the captives take off their thick gloves while moving scrap metal in a human chain, reveling in their ability to physically touch each other. Menzel’s sight gags suggest a fondness for Keaton and Tati, my favorites being when an electromagnet dumps its charge of rusty steel a few feet from the cast and a hysterical moment when two underage characters sit outside a facade spray-painted buildings, their silhouettes visible as they randomly exit the screen. The totalitarian backdrop may be dark, but Menzel’s light touch suggests that individuality and eccentricity will ultimately win out, despite the grim closing sequence.

Second Run’s HD restoration includes a handful of deleted footage and looks fantastic, with Menzel’s cinematographer Jaromír Šofr capturing the full range of rusty browns and beiges in the scrapyard scenes. The extras recommend themselves, including a commentary from the hosts of The projection booth podcast and a first restored short film. 2011 7 Questions and a 2018 interview with Menzel are delightful, with the elderly director offering his thoughts on topics including modern cinema (“…films of the present generally lack compassion…) and filmmaking (“Keep the excitement greater than fear.”) Visualization essential.