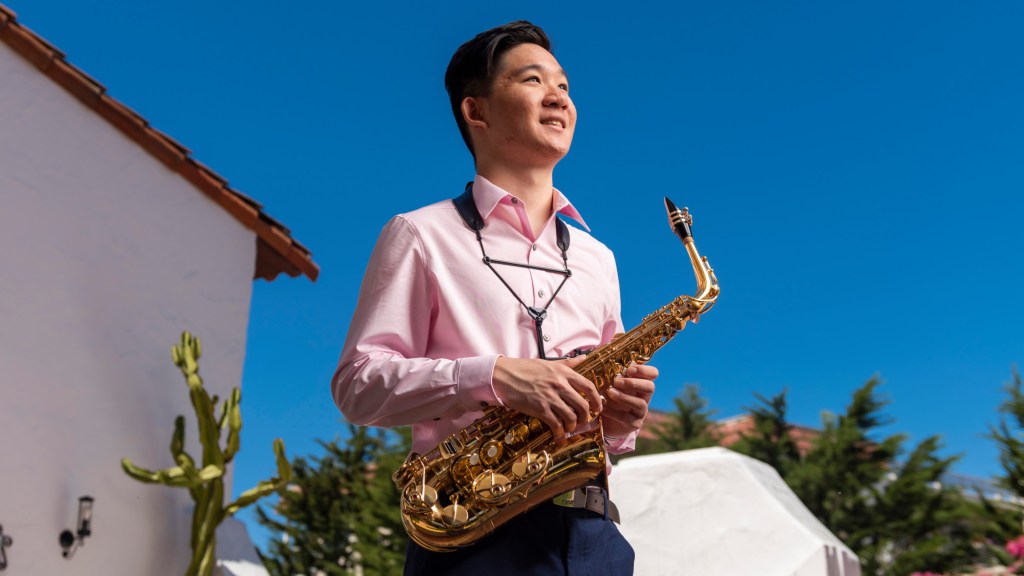 Brian Lin wants to double major in neuroscience and music in college, so he can marry his love for music with its effects on the brain to “promote the use of music therapy to become an important form of treatment of mental health and rehabilitation “.

The senior’s musical portfolio from the Orange County School of the Arts was therapy for judges’ ears as Lin took home the honors of instrumental artist of the year.

The judges universally praised Lin’s tone, phrasing, and inflections. Even its “sense of color and form,” in the words of Judge Tom Mueller, associate professor of music at Concordia University.

Lin specializes in the classical saxophone, an “underused medium,” according to Judge Daniel deArakal, a professor at Chapman University.

See all semi-finalists for instrumental music

Shawne Zarubica, director of the Pacific Symphony Youth Ensemble, said Lin “can be a true pioneer in giving the saxophone increased prominence in the classical music arena.”

Robert Frelly, Music Director of Chapman University, wrote in his comments: “His desire to study the links between music and the brain is both intriguing and timely.

Lin said that the saxophone, which he bought six or seven years ago, was a hidden and overlooked gem in classical music. He hopes to raise it one day to “compete with the violin and the piano”.

One of the performances from the portfolio chosen by Lin was the Sonata “Tres Modere, expressif” in C sharp for alto saxophone.

According to Lin, the piece by composer Fernande Decruckas “was largely forgotten until the turn of the 21st century. Since then it has been part of the repertoire of most classical saxophonists.

See all nominees for instrumental music

Lin said music was a lifelong pursuit, writing in his statement, “I remember my parents showing me a video of me randomly conducting Beethoven symphonies when I was very little.”

The pandemic had a silver lining for Lin in that, through increased use of digital communication, he had better access to a wider range of music teachers and instrumentalists. These experiences, he said, “transformed my playing” and “broadened my tonal palette and the way I interpret music.”

For the past two years, Lin has been a prominent musician with the OCSA wind and jazz ensembles after being transferred from Chino Hills High. In 2020, he won the Senior Winds category in the Music Teacher National Association competition for California. He was also named the replacement for the only chair attributed to the alto saxophone with the 2020 National Youth Orchestra 2 at Carnegie Hall.

Instrumental music is divided into four specialties: jazz, piano and strings, wind and percussion, and world / cultural and commercial music. Artist of the Year Brian Lin is the finalist in Wind and Percussion.

The other finalists are:

The last time Christian P. Perez played saxophone for his father was on Zoom as his father died of COVID-19. The high school student from Valence brought this same feeling of intimacy and “to go beyond notes and rhythm”, to win the jazz specialty.

For his portfolio, Perez played a trio of songs that he said “present three very different but equally beautiful parts of jazz history”: Julian’s rendition of “Cannonball” Adderly of “On Green Dolphin Street” , “You Stepped Out of a Dream” by Dexter Gordon, “and” I Gotta Right to Sing the Blues “by Seamus Blake.

A life surrounded by music and chasing after Danielle, her older violinist sister, helped prepare Sarah Liu, senior at Crean Lutheran High School, to be recognized as the Piano and String Artist of the Year. The Liu sisters have teamed up for countless performances in Orange County, including touring with the Pacfic Symphony. However, Sarah Liu has sculpted her unique space with magnificent interpretations of “The Lark Ascending” by Vaughan Williams and Mozart’s Concerto No.5.

With some original songs, “Mare” and “Love Precision”, and a light version of “City of Stars”, from guitarist, singer / songwriter of “La La Land” Meg Jillian Salanga, senior at Mater Dei High, has been selected Artist of the year in world, cultural and commercial music. Salanga supported her voice on electric, acoustic and bass guitars, including some awesome riffs and rock in “Mare”.