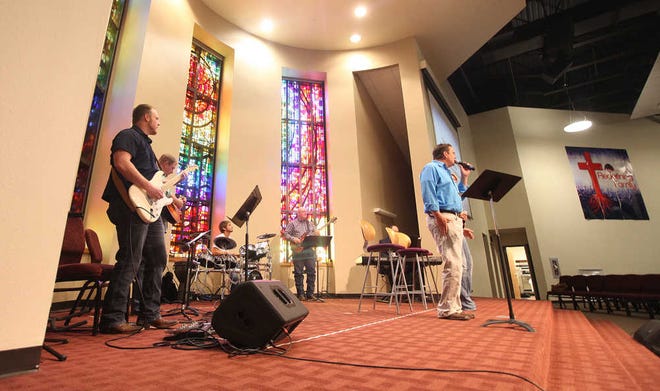 Guitar, keyboard and drums support one of the worship leaders at Monterey Church of Christ Sunday.

While common to many contemporary churches, the scene blatantly clashes with biblical witness and Church of Christ tradition, according to Tommy Hicks, a preacher at the Southside Church of Christ in Lubbock.

Some members, like Hicks, see the inclusion of instruments as a departure not only from tradition, but also from the word of God – and therefore, a matter of salvation.

Others appreciate the denomination’s tradition of a capella worship, but wonder if this is a Biblical requirement.

The a cappella tradition in the Churches of Christ is rooted in the scriptures and the early Christian Church, said Brian Starr, executive vice president of Lubbock Christian University.

“The early leaders of the (Church of Christ) movement held a high opinion of Scripture and, interpreting it within a generally conservative framework, sought to restore the worship practices found in the New Testament church. ”He wrote in an email. “From this position, they generally adopted a capella as their style of worship. “

The practice continues in most Churches of Christ, including the majority in Lubbock.

To explain the tradition, many pastors refer to New Testament scriptures as Ephesians 5: 19-20, which reads: “Speak to each other with psalms, hymns, and spiritual songs. Sing and make music in your heart for the Lord, always thanking God the Father for everything, in the name of our Lord Jesus Christ “(NIV 1984).

Absent in the New Testament are explicit references to instrumental worship, indicating a Christian standard of a capella worship, some argue.

In addition, the New Testament emphasizes inner expressions of spirituality, rather than the outer practices mentioned in the Old Testament, such as the sacrifice of animals and the use of instruments, said Dale Mannon, Green Lawn Church of Christ minister preacher.

“This kind of context partly explains to me why musical instruments were not incorporated into Christian worship,” Mannon added. “Following Christ was meant to be something more internalized than the many demonstrations we see through the old covenant. “

Hicks goes further, calling the question a question of salvation and insisting that the instruments are the artificial practices against which he is recommended in Colossians 2: 22-23, he said.

Buzzing, clapping and other melodious noises without words are also prohibited, he said. Here’s the reflection: The purpose of song is to worship God and encourage one another. And how can you teach your neighbor if you hum instead of singing words?

Monterey also plans to hold its assembly a capella at 8:30 a.m. due to the continued connection to service and the tradition of worship, said senior church minister Barry Stephens.

And for Santiago Rodriguez, member of Green Lawn, musical instruments really take away from the experience of worship.

“When you add a drum and a guitar and add all these musical instruments to your singing, it sounds great – don’t get me wrong – but it sounds even better natural, with what God has given us,” Rodriguez said. . “My wife is a very, very beautiful woman and she doesn’t need lipstick and makeup and everything else to make her look even prettier.” Worship should be reduced in the same way, he said. “Just natural.”

Monterey’s decision to include an instrumental worship assembly was the culmination of years of Bible study and discernment, Stephens said.

Many scriptures, like those in 2 Chronicles 7 and 29, Psalms 33, 92 and 150, affirmed instrumental worship, decided the rulers.

In addition, the New Testament scriptures traditionally used to support a cappella worship did not specifically speak to the context of the gathered worship. What if even if they did, the Greek word translated “music” or “melody” did not refer exclusively to a cappella worship.

Hicks disagrees with the interpretation of the Monterey rulers, saying that the Greek word meant a cappella in the context used and that the Old Testament scriptures were subject to the law of Moses and did not apply. therefore not to Christians.

But Stephens wondered, “If God is so attached to the fact that the instruments are not used in a worship gathering, then why can’t I find a specific text in the New Testament that says you? can’t do it?

Once the leaders of Monterey had a Biblical foundation, they turned to another question: Was instrumental worship good for Monterey? They decided it was; the practice could help them spread the gospel further and provide members with non-vocal musical talents a forum to offer their gifts to God. The leaders then guided the members through Bible study, with the church ultimately opting for instrumental service.

The decision came with costs.

Between 35 and 40 members left during the year-and-a-half-year migration to service. Some left out of conviction while others did because the 10:45 am service would become instrumental and they preferred a late morning a capella service.

However, Stephens noted, about the same number of people joined over the 18-month period – including those returning to Christ’s Church after years of absence.

Overall, the response has been positive, he argued. People participate with as much enthusiasm and sing with all their hearts as before the use of the instruments.

When the Monterey Church of Christ opened its new service on February 5, Hicks preached a sermon titled “We Cannot Fellowship with the Church of Christ Lubbock Monterey,” on the spiritual issues of instrumental worship. That same morning, he discussed the topic “Surveying the Error of Instrumental Music in Worship” on his radio show on KFYO. He then burned the sermon and the radio show to CDs and sent the recordings to Monterey elders and as many Lubbock Church of Christ elders as he had addresses.

In the sermon, Hicks encouraged members of Southside to end fellowship with Monterey – even though family members were part of the offending congregation.

Ending spiritual ties with Monterey was difficult but necessary due to the potential effect on souls, Hicks said.

This is not a piano in worship, but rather the authority of Scripture. The issue is of such importance that the preacher wants to debate it publicly with the leadership of Monterey, Hicks said. Stephens said such a debate would not help continue Monterey’s mission to reach those who do not believe in Jesus.

Although Mannon strongly believes in the a capella cult, he takes a less harsh stance than Hicks.

“There certainly is a fellowship based on Jesus Christ,” Mannon said. “And I think while we’re talking about that – this whole question of instrumental music – I think that’s a fundamental thing to stress because it becomes easy to get distracted and put more emphasis on this issue. instruments or non-instruments All of a sudden, then, Christ is secondary, and I want to make sure that’s never the case.

“The churches of Christ are self-governing, so I presume that when churches make the decision to incorporate instruments in one way or another, they do so very thoughtfully and in prayer and with divine intention. . “

IPS restores the offer of instrumental music in schools