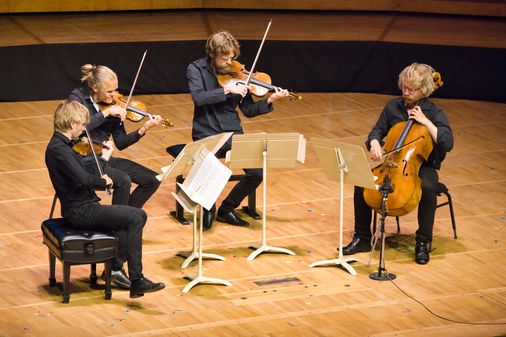 LENOX — Wednesday night’s crowd that gathered at Tanglewood’s Seiji Ozawa Hall for the Danish String Quartet performance could be divided into two camps: those who had at least an idea of ​​what they could do and those who had none. My gig buddy, a lifelong arts marketer and cellist, was in the latter camp, and during intermission his eyes were on. “I could listen to them play anything,” he said repeatedly. Likewise, the woman behind me as I exited: “So how was it?” I heard her friend ask, and turned to see her struggling to find her words through a broad smile.

At the start of this performance, I was solidly in the first group. I had seen several videos of the quartet online, as well as a virtual concert by Dreamer’s Circus, violinist Rune Tonsgaard Sørensen’s Nordic folk band. But nothing could have really prepared me for the whirlwind of energy the quartet unleashed with its performance of Schubert’s String Quartet No. 14, “The Maiden and Death”. Cellist Fredrik Schøyen Sjölin dropped a subtle hint of what was to come when he led the quartet onto the stage, not so much by stepping through the stage door as by jumping off.

But there wasn’t much time to process that before the quartet attacked the first descending ranges, leaving the austere sound to echo and diminish in Ozawa’s rafters. The eminently hummable fundamental melody of the second movement (borrowed from the composer’s own song “Death and the Maiden”) was rendered in a hazy, translucent texture that gave it a ghostly, eerie quality at once and the many variations that have followed, individually distinct though they were. The actors seemed to be dancing in their seats: at times it wouldn’t have been a surprise if they got up and moved around the stage.

With this, the galloping theme of the final movement – ​​played with surprising softness in its first incidences – turned into a seductive danse macabre, linking nervous interludes where the violins seemed to howl in terror. Everything around was improbably in tune with the music, from a misplaced alarm bell to a croaking crow outside: when Sørensen, playing first violin, struck a misplaced piece of sheet music with his bow to prevent it from fall, it strangely resembled a whiplash. , and to the beat of it – perhaps the maiden fleeing Death on horseback? The standing ovation was almost instantaneous.

So what is it about them that drives such success? It’s not their technique – they’re not slobs, but there are more polished sets. Nor is it a commitment to any particular style of music or style of playing. For my part, I have to give it to two things: their commitment to connecting and contextualizing music from all areas of the tradition of concert music and beyond, and the unbridled joy they take playing with each other. Whether it’s playing the well-traveled quartet, or Lotta Wennäkoski’s thorny ‘Pige’ (the main event of the second half) or the Danish folk tune ‘Five Sheep, Four Goats’ that they offered to rappel, everything indicated they were having the time of their lives.

‘Pige’, Danish for ‘girl’, which was commissioned by the band as a backing track to the quartet ‘Death and the Maiden’, provided an intentionally stark contrast to the melody-driven first half. In writing about the piece, the composer expressed her wish to convey the “young girl” perspective, and the first movement seemed to convey the rhythms and cadences of a young woman’s speech on string instruments. The second movement indulged in expansive techniques and insect sounds, perhaps a little too much: the music gelled more in the finale, a “scrapbook” of mixed samples from various sources, including songs by Schubert and “Girls Just Wanna Have Fun” by Cyndi Lauper. which ended with the cellist happily tearing up a sheet of paper. The program ended as it began, with Schubert: the quartet’s arrangement of the song “Death and the Maiden”.

Conventional wisdom would have dictated that the order of the program be reversed, with the source material first, then the contemporary piece as the prelude to the main event. (The first movement of “Pige” can be interpreted as a prologue to the “Death and the Maiden” quartet, according to the program notes.) But subverting conventional wisdom (metaphorically) seems to work for these four: literally was so.

At Ozawa Hall, Tanglewood, on August 3.