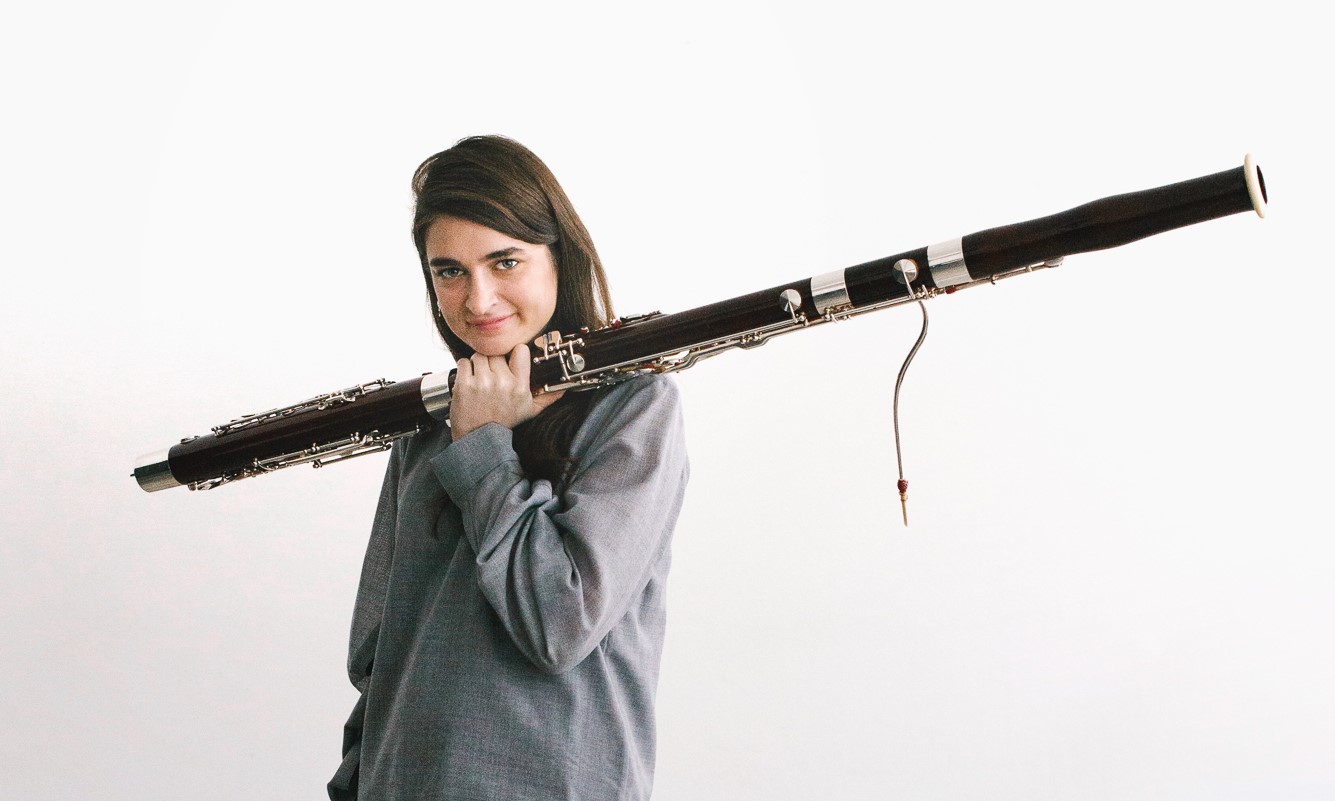 The interpretation of Hummel’s Grand Concerto for bassoon from 1805 is simply superb. Sophie Dervaux of French origin (born Dartigalongue, like armagnac) is principal bassoon of the Vienna Philharmonic Orchestra, and she said of the instrument she plays: “What makes the bassoon special for me is this flexibility, this warmth in the sound. His previous CD for Berlin Classics included some classics from the French chanson repertoire (try Reynaldo Hahn’s magnificent ‘À Chloris’). On the new record, we find more persuasive communication, well-judged pacing, and graceful, warm playing. She also makes her debut as a conductor on this disc, leading a chamber orchestra from the Salzburg Mozarteum in all three performances of the Viennese concerto repertoire. A comparison with the 1989 Thunemann/ASMF/Philips version of the Hummel, recorded in 1989, highlights how communicative, personal and moving Dervaux’s playing is. These are virtuoso works, and as she whistles freely up and down on the instrument’s compass, the reassuring click-clack of her Püchner instrument is often audible.

Mozart’s concerto dates from 1774, when the composer was 18 years old. Köchel’s catalog speculates on the existence of three other concertos written by the teenager for the same dedicatee over the next year, but this is the only one to have survived. Twelve years later, the material of the slow movement resurfaces – a tone lower – as “Poggi Amor” in Figaro. I found the balance between soloist and orchestra curious, and the Thunemann comparison is also instructive here. While Neville Marriner placed his bassoonist as the hero who will inevitably win the battle with the orchestra (the ASMFs are also softer, and sometimes more alert than the Mozarteum players), here the solo instrument is slightly set back, as if Dervaux welcomed those moments when the orchestra – which she directs – can swallow her up as a soloist.

Of the three pieces on this disc, one is a first recording: a concerto in C major by Johann Baptist Vanhal, which, as the cover note points out, shares the same orchestration as Mozart’s concerto, and presumably has was written as a historic example of the “recommended if you like” principle. By all accounts it is light work, and Vanhal is happy to provide meaningless phrases and scale-based material to occupy the soloist, rather than melodies with a bit of expressive weight with which she can work. Sophie Dervaux sees herself as an ambassador of the bassoon, and this whole record is really a wonderful advertisement for the sound quality of a bassoon. She really makes “the clown of the orchestra” sing. – Sebastian Scottney

Alexander Tsfasman? Born in Ukraine in 1906, he gave Gershwin’s first Russian performer Rhapsody in Blue in 1945, his career as a prominent jazz pianist and composer passed largely under the radar of Western audiences. Ludmila Berlinskaya and Arthur Ancelle emphasize the common musical denominator that Tsfasman and Gershwin shared, namely that “their jazz is written on paper and comes from the roots of classical music”. The four delicious parts of Tsfasman Jazz Suite constitutes a superb introduction, heard here in a transcription for two pianos by Igor Tsyganov. The opening, “Snowflakes”, is an earworm, its language placing it firmly within the Gershwin musical spectrum of the late 20th century, perhaps unsurprising given that Tsfasman and Gershwin shared similar Jewish roots. Ancelle’s arrangements of four Tsfasman songs are fun, the moods veering from whimsical (“Jolly Night”) to bluesy feeling (“Always with you”). And there’s an inventive fantasy from Tsfasman about Gershwin’s “The Man I Love.”

An essential listen, and the disc also contains a decent selection of transcriptions for two pianos by Gershwin. “Someone to Watch Over Me” is delightfully done, and there’s a fun arrangement of the Three Preludes. Best is Gershwin’s own transcription of his variations on ‘I Got Rhythm’, a wonderfully inventive, too rarely performed work. The harmonic audacity reflects the composer’s studies with Joseph Schillinger, without however losing sight of the original theme. This performance is as idiomatic as any you’ll find on record; you can feel Berlinskaya and Ancelle smiling. Great fun – you need this CD. 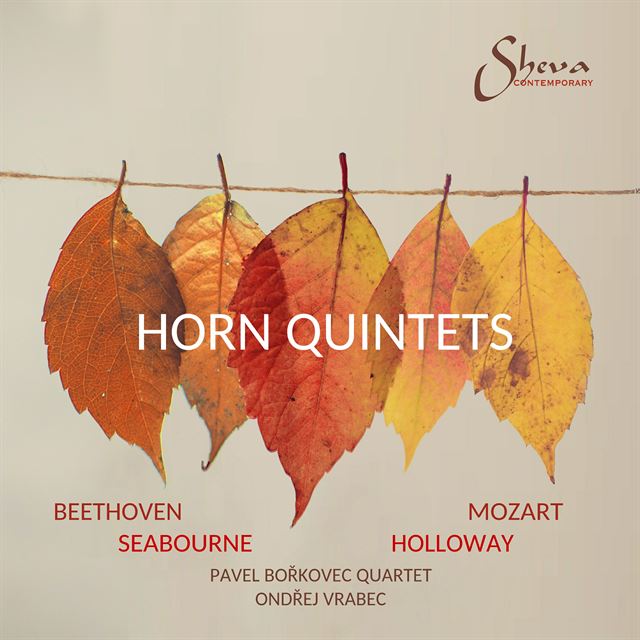 Beethoven completists need this disc because it contains a striking arrangement for horn and string quartet of the first op. 17 Sonata for horn. Composed in 1800 for the Bohemian virtuoso Giovanni Punto (born Jan Vaclav Stich), it’s an ungainly piece with a diabolical piano part, and the sonata sounds much nicer in this incarnation. Cellist Sebastian Comberti’s recent edition is based on an 18th century transcription for string quintet by a certain Carl Khym. The horn and solo strings are well balanced, and this compact work does not overstay its welcome. Ondřej Vrabec, solo horn of the Czech Philharmonic, is here associated with the Pavel Bořkovec Quartet; the playing is exquisite, Vrabec’s recognizable Czech timbre balm for the ears. More memorable is Mozart’s sublime Quintet K407, a technically demanding accompaniment to the four horn concertos, its final rondo in 2/4 rather than the usual 6/8. Vrabec’s performance, on a modern valve horn, is as good as any I’ve heard on record. Although not as profound as Mozart’s sublime Clarinet Quintet K581, it is a beautiful work, Vrabec taking flight in the tender slow movement.

Two contemporary pairings, both written for Vrabec, are striking. Peter Seabourne’s Horn Quintet Grave is a somber four-movement work inspired by a rambunctious monotype by Seabourne’s late wife. The horn and strings trace a difficult and winding path, finding a little peace in a lyrical and melancholy slow movement. The final bars are dark and inconclusive. Seabourne’s friend and teacher Robin Holloway’s Horn Quintet is more outward-looking, with the long lyrical lines of the first movement projected fearlessly by Vrabec. Holloway knows how demanding his writing is, granting the horn a long respite for most of the second movement. The slow central section of the finale is a silent setting of a sonnet by Lord Edward Herbert (George’s brother), horn and strings tracing each word, before Holloway launches an upbeat coda. Vrabec’s charisma is irresistible; he performs the two new pieces with a winning mix of swagger and humility. 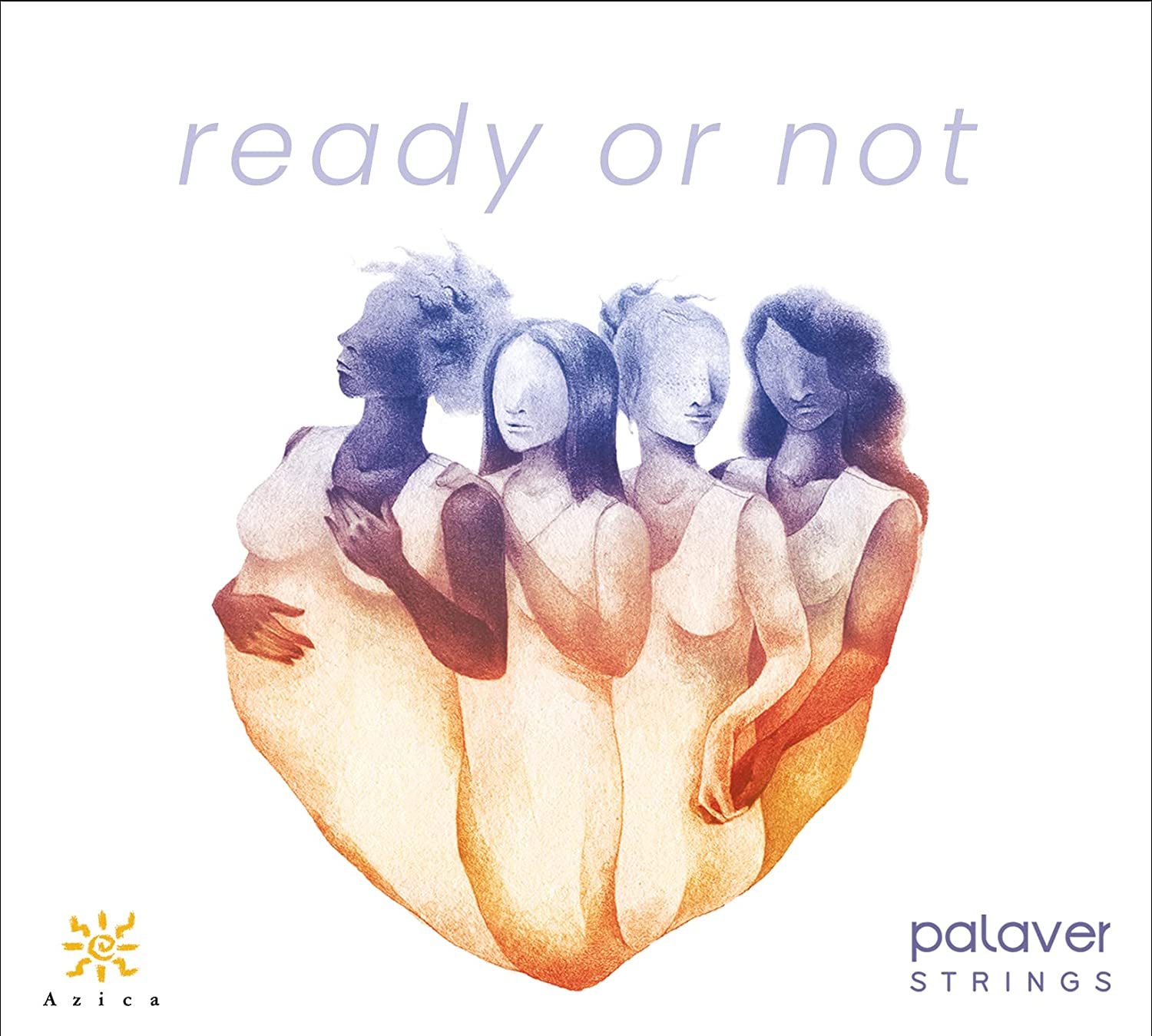 Palaver ropes: ready or not (Azic)

Two eclectic string collections have recently landed in the pile. Buy both. Portland-based Palaver Strings gives us Ready or Not, a celebration of female composers. They open with Grażyna Bacewicz’s 1948 Concerto for String Orchestra, a fascinating three-movement concerto grosso that ranks among the most captivating string concerto works of the last century. Best to ignore Bacewicz’s colleague Stefan Kisielewski’s compliment (“…bloody…written with masculine creative power…”) and revel in the rhythmic energy and harmonic punch. It is a masterpiece, well served by the seventeen players of Palaver. Going from Bacewicz to a tiny sixteenth-century madrigal by Maddalena Casulana is a big step forward, and Jesse MacDonald’s transcription works beautifully, as does Barbara Strozzi’s “Lagrime mie” from a century later, sympathetically arranged by Adam Jacob Simon and softly sung by soprano Sophie Michaux. .

Akenya Seymour Fear the Lamb commemorates the black teenager Emmett Till, tortured and lynched in 1950s Mississippi. There is a chilling passage where the players’ collective whistles allude to Till’s speech impediment, and a moving elegy, the individual players have the opportunity to improvise. Bass Nate Martin’s solo is brilliant. And we get three tracks from local violinists Liz Knowles and Elizabeth Moore, the latter’s “Fore Street” a closer exuberant album. All superb, and warmly recorded. 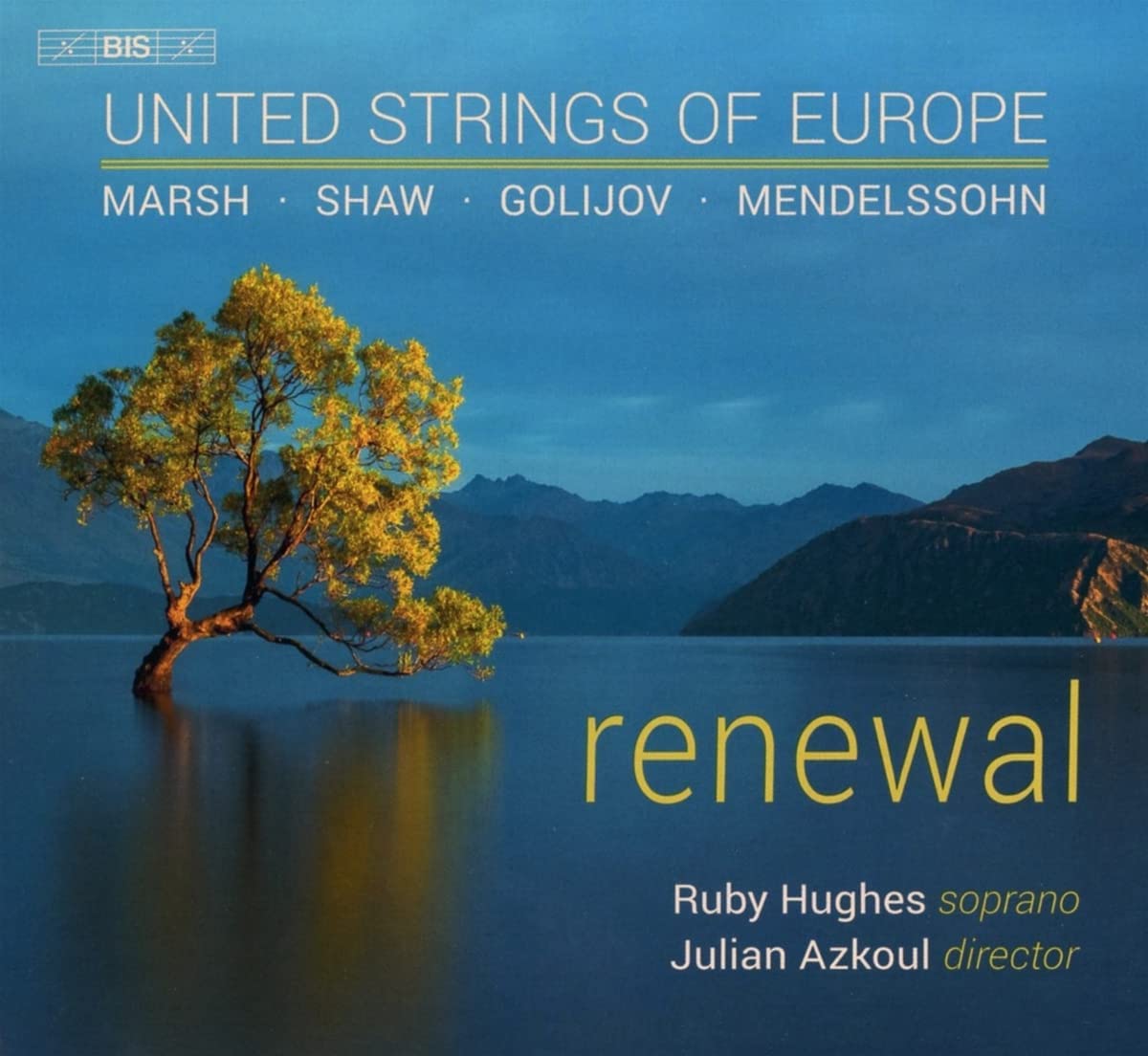 Julian Azkoul’s second record with the United Strings of Europe is equally diverse. The greatest work here is Azkoul’s adaptation of Mendelssohn’s dark String Quartet in F minor, a late work composed after his sister’s death. The emotional extremes are more pronounced, Mendelssohn’s sublime slow movement sounding almost Mahlerian. The final chord of the finale is like a sharp punch. Joanna Marsh’s “In Winter’s House” was commissioned for Tenebrae, Marsh’s easier-to-follow harmonies played through strings. Caroline Shaw’s “Entr’acte” alludes to the classic minuet and trio form, inspired by Shaw hearing a performance of a Haydn quartet. The textures swell and thicken to magical effect, the return of the four solo strings playing the central minuet theme at the end is brilliantly effective. Shaw’s “and the swallow” closes the disc, offering a well-deserved consolation after the Mendelssohn. Originally a setting of Psalm 84, this should be listened to through headphones, Shaw’s antiphonal effects imitated by dividing the strings into two groups with the bass in the centre.

by Osvaldo Golijov three songs, sung here by soprano Ruby Hughes, were originally written for orchestra, this new version for strings adopted by the composer after hearing the USE play it. “Night of the Flying Horses” comes from the soundtrack of a Sally Potter film, between a Yiddish lullaby and a frantic Gypsy gallop. Hughes is wonderful in the second song’s Galician lament and in the closest, Golijov turning a seven-line poem by Emily Dickinson into a haunting lament. The United Strings of Europe will perform the Golijov at Wilton Music Hall May 25 – check them out. A wonderful album, and the warm, spacious sound of BIS is quietly spectacular.