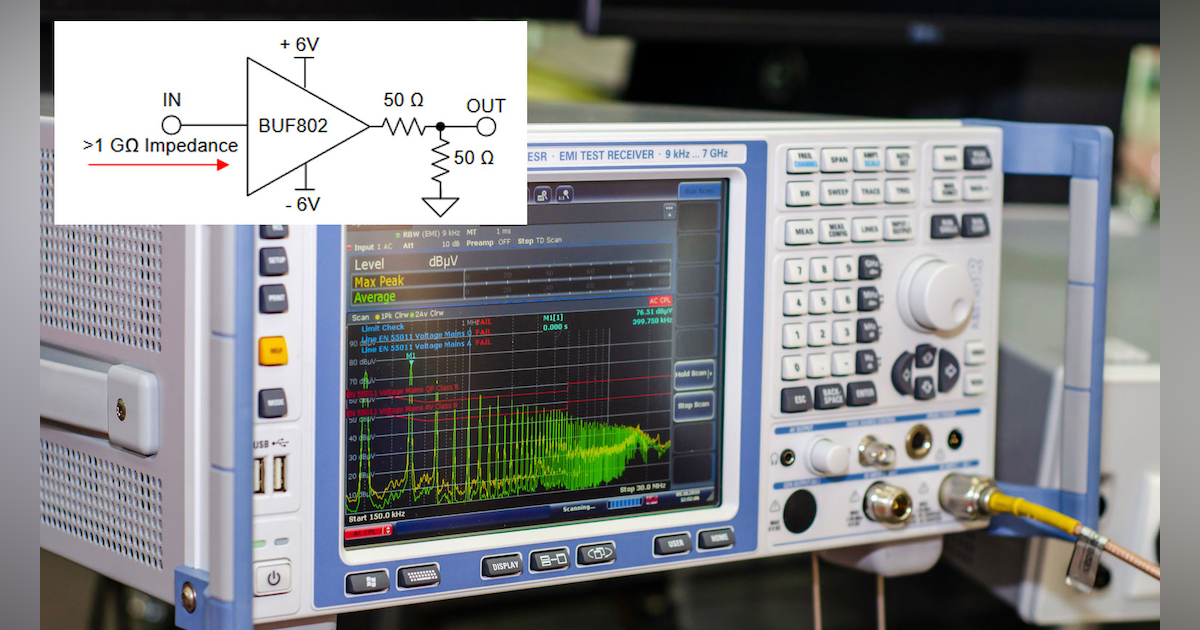 “Buffer” is one of many electronic and computer engineering words with multiple meanings. It can refer to a separate physical memory dedicated to temporarily storing data, or it can be a software-defined memory allocation for data in process. Buffer can also refer to a hardware driver for a low impedance load such as a relay or an LED.

However, in classical analog signal chain circuits, it refers to a component residing between two stages to ensure that the signal source is compatible with the characteristics of its load stage. An RF buffer amplifier typically does not perform traditional signal “processing” tasks such as filtering or noise rejection. Instead, its usual role is to provide adjustment between source and load while isolating the source output from the characteristics and variations of the load input.

This may require the buffer to transform the high impedance output of the source, so that it is “comfortable” to drive the low impedance of the load. The right buffer amplifier can mean the difference between getting “good enough” and “really, really good” system performance.

TI also argues that the bandwidth offered by the BUF802 was previously only accessible through application-specific integrated circuits (ASICs). ASICs, however, inherently required a significant commitment in terms of design time, complexity, risk, and cost due to the need for dozens of discrete components such as FETs, bipolar transistors, and protection diodes.

Input voltage noise is only 2.3 nV/√Hz, while input impedance, another critical parameter in these applications, is 50 GΩ in parallel with 2.4 pF. Operating from a ±4.5 to ±6.5 V supply, the JFET-input BUF802 can easily drive the ubiquitous 50 Ω load. It also offers user-adjustable quiescent current for a power/performance trade-off and an integrated input/output clamp with fast overdrive recovery, which is another concern in these applications.

In applications where extreme DC accuracy is not as critical with offsets less than 100 mV, or where the input is AC coupled, the BUF802 can be used as a standalone input buffer where only sound main path is used. In this mode, the BUF802 uses the JFET, output driver and bipolar transistors in the main path to reproduce the signal applied to the IN input to its OUT output.

If greater accuracy than offered by the BUF802 alone is required, designers can configure the BUF802 in CL mode in conjunction with a separate precision amplifier. In this mode, the BUF802 uses the auxiliary path and the main path to control the output voltage and simultaneously provides high DC accuracy and 3 GHz bandwidth with a maximum offset drift of 1 μV/°C.

In this scenario, the composite loop divides the applied signal into low frequency and high frequency components and passes them to different circuits with an appropriate transfer function. The low and high frequency signal components are then recombined in the BUF802 and reproduced on the OUT pin. (No, this is not the Doherty amplifier topology, as the BUF802 mode is user-preset and not determined by signal amplitude.)

Additionally, the company offers the BUF802RGTEVM (EVM) evaluation module, which is very useful for buffer amplifiers such as this where layout is critical. (Fig.3). This EVM can be configured for composite loop mode with a precision amplifier or just the BUF802 device alone. It features single or split power supplies and footprints for SMA connectors on all analog inputs and outputs. The EVM layout is optimized to reduce parasitic coupling and provide the best signal fidelity across the entire frequency spectrum.