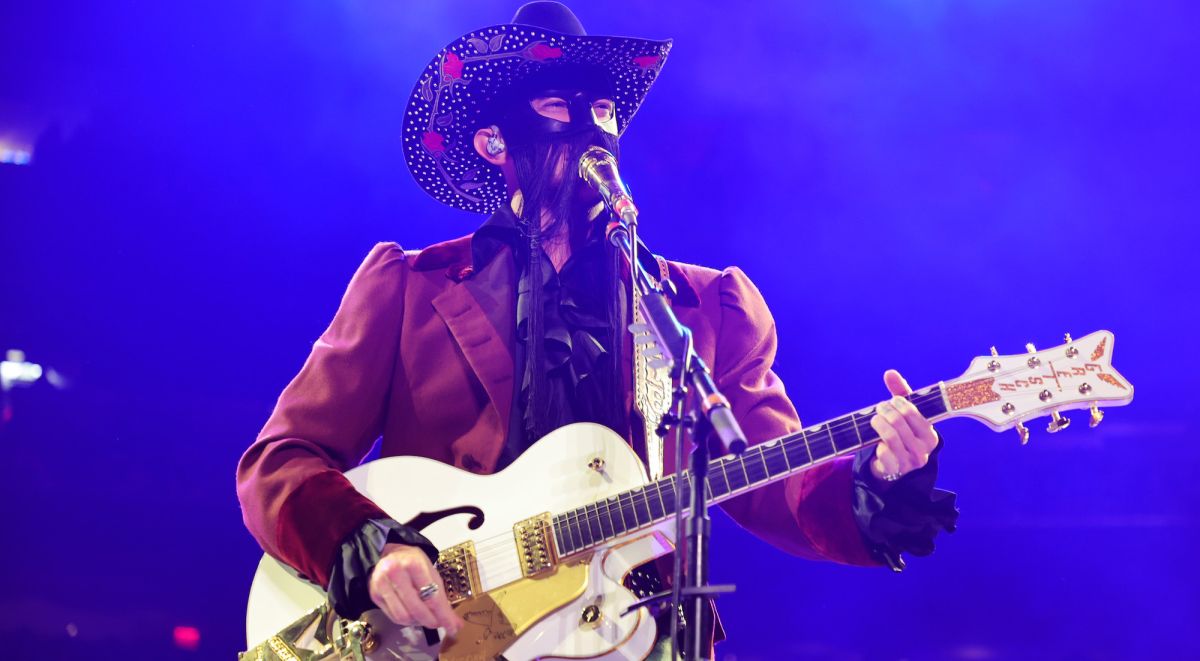 welcome to guitar worldThe weekly roundup of musical highlights from the, uh, guitar world. Every seven days (or so), we strive to bring you a selection of songs from across the guitar world, all with one thing in common: our favorite instrument plays a starring role.

What is that? A new collaborative effort from progressive guitar maestros Jason Richardson and Tim Henson. To be frank, it’s amazing that these two titans are never short of rule-breaking ideas, such is the breadth of their game. However, Upside down proves that the indescribable creativity of the duo is still running at full speed and that they continue to push the guitar to its absolute limits.

Standout Guitar Moment: Choose a significant moment in Upside down is an impossible task. In an ideal world, “the first five minutes and 43 seconds” would be the answer. However, there’s only one 30-second stretch – Henson’s guest solo – in which the pair perform together, so it feels like an appropriate compromise.

What is that? The single that kicks off the preparation for Health’s recently announced new album, DISCO4 :: PART II. After previously released tracks with Nine Inch Nails, Poppy and Perturbator – an eclectic mix of artists as it is – Cold blood sees the Los Angeles noise rock trio join forces with groove metal titans Virginie Lamb of God, letting their new collaborators take the creative reins, with the guitar riffs of Willie Adler and Mark Morton in the spotlight.

Standout Guitar Moment: The guitar riff when the tempo picks up at 1:13. It might be predictable LoG, but they’ve found a winning songwriting formula, so why bother?

What is that? The catchy, swaggering debut single from Broncos: Chapter 1the new EP from America’s favorite masked country star, Come on baby, cry is the product of a skilled songwriter who can take a standard set of ingredients and create something that leaves a unique and lasting impression.

For fans of: Kacey Musgraves, Dolly Parton, The Cactus Blossoms

What is that? Lindsey Jordan’s synth-tinged sophomore effort defied many ideas found during its indie guitar masterclass debut, but this demo of valentineSnail Mail’s title track recalls the origins of the Snail Mail singer-songwriter. The gigantic chorus of the final version has yet to be achieved here, and paired with that delicate single-coil tone, adore you becomes less a hymn of rupture and more a tender love letter.

Standout Guitar Moment: The track’s neat finger-picking pattern makes the most of a chord progression that just can’t sound tired no matter how many times it turns.

What is that? A track from Damon Johnson & The Get Ready’s latest nine-track album, fighting lessons. This time around, Johnson – whose A-list credits include Black Star Riders, Alice Cooper and Brother Cane – takes his time to shine and takes the opportunity to delve into his stellar six-string arsenal for punchy, hard-hitting sound. frolic.

Standout Guitar Moment: Each chorus is treated with a follow-up solo, though the second main effort is a particular highlight. It’s got everything you’d expect from a classic rock solo: pentatonic licks, patterns that migrate up the fretboard, and a climaxing high-end bend.

What is that? The long and expansive debut single from (watch my moves)the ninth solo studio album by the singer/songwriter and master guitarist. Like exploding stones unfolds elegantly in seven minutes, with the aim of lowering the listener’s blood pressure along the way.

Standout Guitar Moment: Dreamy, unhurried and simple as it is, the money comes between the lines of Like exploding stones. Vile’s twangy whammy bar work, jerky bends and consistently flawless use of modulation will give you something new to love every time you return to it.

For fans of: The War on Drugs, Real Estate, Tame Impala

Amon Amarth – Put your back to the oar

What is that? True to their Viking metal roots, Swedish melodic death metal stalwarts Amon Amarth have issued a clarion call with a relentless new track, Put your back in rowing. Wild from the get-go, the track is guitar-driven and packed with so much macho bravado it’ll have you growing a beard several inches in five minutes.

Standout Guitar Moment: The riff that accompanies the chants of “Row!” Line!” is rightly uplifting and reflects the exciting subject matter of the track.

What is that? The first single and title track from Trower’s upcoming album, which will arrive on April 29. Watts for the effort to come. With this single, it’s clear that Trower’s tasteful chops are still there with the best, as evidenced by those clean intro lines and chunky fingerpicking patterns.

Standout Guitar Moment: Trower’s nonchalant noodles – concocted via the timeless combo of a Fender Stratocaster and Marshall amp – are faultless, but the beefy, heavy solo at 2:30 is certainly worth the shoutout.

What is that? The latest installment of unsurpassed prog-metal from Tosin Abasi and Javier Reyes, and perhaps the pair’s most brutal offering to date from the next Parrhesia. Produced by outskirt juggernaut Misha Mansoor, The Gordian nothingness is a total head trip from start to finish, traversing chin-scratching time signatures with fluid ease. The arrangement is overwhelming, the tones are simply stunning, and if there’s a better riff this year, we’d love to hear it.

Standout Guitar Moment: The frenetic eight-string exchange that guides the track’s breakup after two and a half minutes: Abasi and Reyes’ ability to pick out the most sinister notes imaginable strikes again, all delivered with typically deadly technique.

For fans of: Outskirts, Meshuggah, Monuments

What is that? The second single from Sarah Beth Tomberlin’s highly anticipated second album, I don’t know who needs to hear this…, happy accident gets a big boost from guest guitarist Cass McCombs.

Standout Guitar Moment: Hearing Tomberlin’s phenomenal songwriting on a canvas of her and McCombs, the dual-guitar interplay is thrilling, especially when one veers off course for textural, raucous explosions while the other sustains the fort. along with the song’s beautifully charred main riff.

Joe Traxler – Forget How To Speak

What is that? The latest single from Austrian guitarist, producer and singer-songwriter Joe Traxler. With a fundamental sound tone close to that of John Mayer – peep the half of my heart– chorus twist – albeit with a healthy dose of his own DNA, Traxler’s songwriting chops return once again, as does his selective, full-spectrum appreciation of guitar tones.

Standout Guitar Moment: It must be the tones. Traxler clearly takes an expansive approach in forget how to speakdelivering a range of beautiful six-string sounds, from pristine opening acoustics and dual-track electrics to spatial interlude licks.

What is that? A new track by Canadian rock band Three Days Grace, in association with Rock Star Supernova frontman Lukas Rossi. The track – which comes before the band’s next album, Explosionreleased May 6 – has that quintessential early 2000s NWOAHM sound, led by a huge electric guitar riff and effortlessly catchy vocal hooks.

Standout Guitar Moment: The main guitar riff – in the intro and after the choruses – is simple yet overwhelming, and drenched in an undeniably satisfying fuzz.

What is that? A snippet of a single from one of the most uplifting math-pop bands to emerge from the UK in recent years. FES tele-toting frontman Pollyanna Holland-Wing marries the kind of dreamy extended chords you’d expect to find in Midwest emo with an irresistibly progressive edge – think Covet meets Paramore and you’ve got a pretty good idea.

Standout Guitar Moment: Obligatory “watch the sick banging at 2:53” comment – and it sure is sick – but the whole track is awash in beautiful guitar tones and ethereal delay textures.

For fans of: TTNG, Covet, Paramore

What is that? A new single from seven-piece ensemble project The Dip, which takes an old-school style and blends it with contemporary indie-rock flair. true competitor is a fitting introduction to their repertoire: the sweet six strings form the basis of the savory chord progression and dance under the piece’s big band instrumentation.

Standout Guitar Moment: There is a very nice two-part interplay in the verses. While one takes care of the usual clichés of the high register, the other tinkles on certain descending melodic lines.