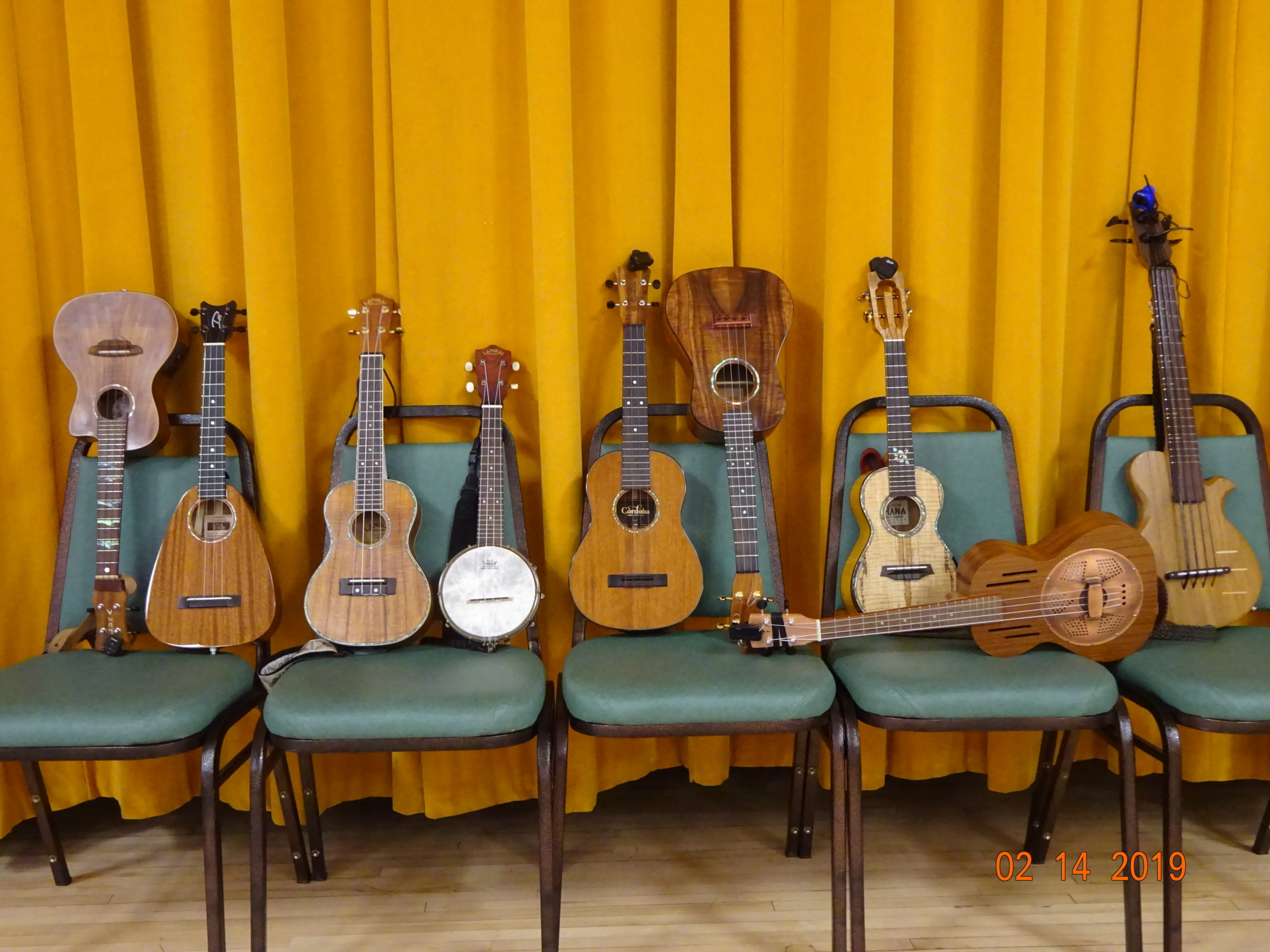 In the Ukulele Society of Door County, Nobody’s ‘Second String’

A range of members’ ukuleles. Photo courtesy of Barb Ottum.

Bruce Hake bought his first ukulele with no intention of playing it. Instead, he planned to hang it on a Hawaiian-themed wall in his home, alongside a canoe paddle and pictures of Hawaii.

But when Hake’s wife heard about a local ukulele class that offered two two-hour sessions, she pushed him to enroll so the instrument wasn’t just decoration.

Learning to play the ukulele was “just a fluke,” Hake said, but now, nine years later, he’s a co-leader of the Ukulele Society of Door County (USDC).

The group meets twice a month at the Fish Creek YMCA to play songs and sing, often choosing alumni from artists such as Elvis and the Beatles. It also hosts occasional public performances.

Only about eight people — all of whom were first-class ukulele attendees — showed up at the first USDC meeting in 2013, but now the company has about 30 active players. It has retained many members since day one and has also welcomed newcomers.

One such newcomer is Bob Jorin, who has been playing the ukulele for a year and joined USDC around the time he started playing the instrument.

Playing as a rookie in a room full of people — some of whom have been playing for years — can seem daunting, but the band members “immediately do a great job of making you feel welcome,” Jorin said.

It’s a theme echoed by many of his fellow USDC members, several of whom have formed close friendships by bonding over their shared hobby.

Members’ backgrounds vary, but it’s not uncommon to find someone who has played another instrument before. Jorin, who is also a bassist, was drawn to the uke band because he wanted to meet other musicians after moving to Door County.

USDC co-leader Barb Ottum has been a musician all her life, but she focused primarily on woodwinds before taking up the ukulele. The instrument’s small size and fewer strings make it easier to play than other stringed instruments such as the guitar — an aspect that’s especially important as players age, Ottum said. Plus, once players know just a few chords, they can play dozens of songs, making it easy for new players to get started.

Some USDC members have taken their affinity for the ukulele to the next level. Jerry Lecy, for example, has been with the band since day one and now makes his own ukuleles while taking lessons in Hawaii. His work includes 22 instruments, each taking around 50 hours to make. Lecy doesn’t keep his hobby to himself either: he shares his interest with his three children and nine grandchildren and has taught many of them how to play.

Beyond the ease of learning the instrument, the light and courageous sound of the ukulele can only make players and listeners smile.

“When times are tough, more people turn to happy things, and the ukulele is a very happy instrument,” Ottum said.

“Everyone should be given a ukulele at birth, and we’d all be so much happier,” she said.

But Farnan is only half kidding. She said science shows that playing music is a deeply physical experience, grounding players by forcing them to focus on their breathing and how they hold their bodies.

When Farnan was a music therapist working with people with developmental disabilities, she noticed major improvements in her clients’ behavior after they started playing an instrument. She introduced some of them to the ukulele as a smaller, simpler alternative to the guitar, and she continued to play even after her retirement.

“You have an emotional outlet; you get together with people; [and] it’s a lot safer than pickleball,” Farnan said.

Ready to play? The Ukulele Society of Door County meets the second and fourth Mondays of each month, 1-2:45 p.m., at the Northern Door YMCA, 3866 Gibraltar Road in Fish Creek. A YMCA membership is not required and new members of any skill level are welcome to join.