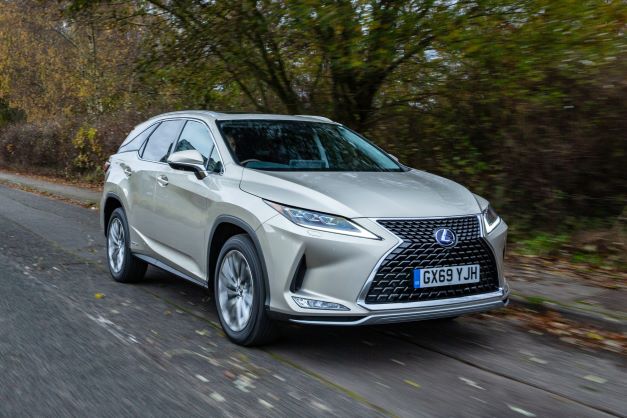 The RX is available in the UK in three trim levels: RX, F Sport and Takumi. The seven-seat RX L Takumi we released last week can be specified with two individual captain-style chairs in the second row in place of the three-seat bench.

The cockpit is designed to help keep the driver alert and comfortable, supported by HMI technology that minimizes distraction by making switches and controls easy to use. An example of this is the central 12.3-inch display which now incorporates a touchscreen function, as an alternative to using the fiddly touchpad. So, entering a ZIP code in sat nav is simplicity itself. To accommodate this new feature, the screen has been moved further forward on the center console, providing a wider viewing angle and within easy reach of the driver and front passenger. Multimedia functions can also be controlled using a trackpad or voice command.

Below the touchscreen is the climate control panel which has been streamlined with several buttons replaced by a series of toggle switches.

A 360-degree bird’s-eye view of the car’s position helps the driver get a panoramic view of the SUV when maneuvering at low speeds or when driving off-road at a slow pace. The monitor also works in conjunction with the SUV’s park assist system and rear cross traffic alert.

A black finish for the dash and doors can be combined with black (RX grade), rich cream (Takumi) or new ocher (all grades) trim. The RX Takumi offers a choice of interior design, with a new bamboo inlay which can be specified with the ivory trim; with Black and Ivory options, the choices are Open Pore Walnut and Dark Brown Shimamoku. The RX F Sport has two new interior trims – Flare Red and Black and White – and comes with a brushed aluminum inlay.

Since the Lexus brand is known for its fit, finish and quality of materials, special attention has been paid to the design of the seats. The seat structure incorporates polyurethane foam wrapped around an iron frame. It’s the flat cushion and raised side sections that support the hips and keep the body stable, while subtle depressions in the surface of the cushion allow smaller occupants to enjoy the same level of body support as taller people.

Heated front seats are also standard for the driver and front passenger, along with new suction-type ventilation that draws directly from the air conditioning system for a faster cooling effect.

The driver and front passenger seats are low, providing plenty of headroom. The position of the steering wheel is closer to the driver and a lower angle for the steering column creates a more attractive driving position. The quilted pattern of the front seatbacks matches that of the door panel trim.

By using a new frame construction for the front seats, more legroom is provided for rear passengers, adding an additional 20mm of knee clearance compared to the previous model. And to help front-seat occupants find the ideal seating position, the seat height adjustment range has been increased by 15mm.

Lexus has installed an additional third row of family-friendly power seats in the RX L model by adding 110mm to the rear overhang, bringing the vehicle’s overall length to 5,000mm and giving the tailgate glass a steeper angle to provide a little more room for the rearmost passengers. The attention to detail extends to the tailgate wiper motor moved from the top to the bottom of the screen, to maximize potential headroom.

The two rear seats can be moved forwards and backwards electronically according to the occupant’s needs, providing additional legroom (+94 mm) for those seated in the third row. The seats are adjustable using control buttons accessible from the second row or the trunk. Fine leather upholstery is also standard, along with a three-zone climate control system with independent controls for third-row occupants.

Although the RX L retains the coupe-like profile of the five-seat RX, decent headroom for third-row occupants has been ensured by making the tailgate window angle slightly steeper. The second-row 60/40 split-bench has been set higher, so there’s good footroom for third-row passengers as well. The seats are ideal for children on any journey and comfortable for adult users on shorter journeys.

When the seats are folded down, the load space has a flat floor that extends to 1,067mm in length. A retractable tonneau cover keeps luggage out of sight; when not needed, the cover unit can be stored in a dedicated space under the boot floor.

There are also plenty of lockers for storing gear, including the large glove box that opens effortlessly. The front door bins are also deep and wide with extendable side panels. The two front cupholders also offer generous and different depths.

Two audio systems are available: a 10-speaker Pioneer Premium audio system and a 15-speaker Mark Levinson surround sound audio system, depending on the version chosen. The audio system uses Clari-Fi technology, developed by Harman, which supplements real-time frequencies lost in compressed audio files, such as MP3s and streaming audio files. This restores the sound quality and stereo mix as close to the original recording as possible.

To improve connectivity, the six USB ports dotted around the cabin now have high amperage so devices can be charged faster. Smartphones can be integrated wirelessly into the car’s multimedia system via Apple CarPlay or Android Auto, and connected services can be accessed via Lexus Link, which also offers the option of in-car WiFi. LexusLink offers a range of features, including find my car, share my car, last mile advice, driving analytics and online service reservations.

The center console includes a new smartphone holder and additional USB ports, including a port suitable for video playback. Other infotainment features include DAB Seamless Link, with seamless switching between broadcast channels to maintain signal quality; Miracast, which displays smartphone screen images on the center display and relays phone sound through the car speakers; Smartphone Linking to display compatible apps on the central display; and Smart Device Link, which connects and interacts with phones via a Smartphone Linking feature.

Driver assistance when you need it

Key to its safety performance is the latest version of the Lexus Safety System+, an integrated safety package that provides a suite of active safety and driver assistance to help prevent accidents or reduce their severity if an impact is inevitable.

The Pre-Collision System (PCS) uses a front camera and millimeter wave radar to detect vehicles and pedestrians on the road ahead. If it calculates a risk of collision, it automatically warns the driver and provides additional braking force as soon as the brake pedal is pressed. If the driver does not react and the system judges that a collision is imminent, the brakes are automatically applied to reduce vehicle speed and the force of any impact, and seat belts are tensioned.

The functionality of the PCS has been increased so that it is now able to detect pedestrians in the path of the vehicle during day and night driving, and cyclists during the day.

The same radar unit is used to provide Dynamic Radar Cruise Control (DRCC) at all speeds, which helps the driver maintain a safe distance from the vehicle in front. Once the lane is clear, the RX automatically accelerates to its preset cruising speed.

Lane Tracing Assist (LTA) detects when the RX deviates from its correct lane, without the turn signals being used. The system will automatically provide warning and steering inputs to help keep the vehicle centered in its lane, by detecting markings on the road surface or road margin. These features work when Dynamic Radar Cruise Control is in use and can be turned off if desired.

Other ADAS technologies include Adaptive Variable Suspension Control; panoramic view monitor; blind spot monitor and rear cross traffic alert with automatic braking; parking assistance brake; and sway warning. The latter involves the use of cameras to monitor the car’s position in its lane and the driver’s steering commands. If it detects degrees of vehicle sway caused by driver distraction or drowsiness, it issues an alert and displays a warning on the multi-information display, recommending that the driver take a break.

Throughout the cabin, the quality and finish of upholstery, trim materials and expensive details continue to reflect the attention to detail that Lexus engineers have given to the RX L. On a more practical level, the vision forward is pretty good, uncompromised by the high seating position, low-profile dash and narrow A-pillars. Materials with varying properties have been used in different areas of SUV construction, providing strength, stiffness and lightness to an appropriate extent.

As you might expect, the ride is relatively quiet, thanks in part to acoustic glass in the side windows, sound deadening liners for the vehicle floor, positioning of the rear body frame to reduce lateral vibration, and the use of foam/sponge vibration damping material around door openings and front lintel. Sound deadening materials are present in the cabin, ceiling and floor areas to prevent noise intrusion from the engine compartment and outside the vehicle, with double seals all around the doors. Rival seven-seater models include the Audi Q7, Volvo XC90 and Land Rover Discovery.

Lexus recently unveiled the fifth generation of the RX, describing it as a completely reimagined model that opens a new chapter for the original luxury SUV.

In short: the thong sling