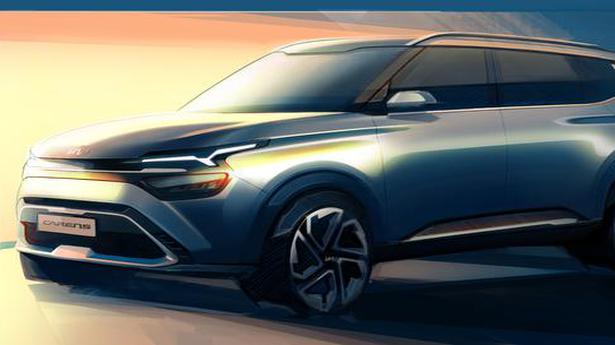 Kia has previewed its upcoming Carens three-row vehicle via design sketches giving a preview of the final design of the brand’s fourth model for the Indian market. The sketches provide an overview of the exterior and interior of the upcoming model.

Although Kia doesn’t call it a minivan, the sketches make it look more like a cross with a, but with an SUV stance. Kia calls the Carens’ front look the “Tiger Nose design” and we can expect to see similar styling cues on future Kia models. Up front, the Carens features a flat bonnet, with a straight nose and a bulky front bumper. The Carens features a dual-headlight design with slim, wrap-around lamps and a relatively smaller grille. The main headlights are placed under the slim units and should be fitted with an LED setup, at least on the higher variants.

Moving to the side, the Carens has a slightly flat appearance, with large wheel arches and body cladding that runs the length of the vehicle. Other details to note are the bold line that runs from the headlights to the front door and from the rear door to the taillights. Similar to the front, the rear bumper is also bulky and completes the SUV look of the Carens.

Moving on to the cabin, the interior sketch shows a layered dashboard with a premium center touchscreen. Kia has confirmed that the model will get a 10.25-inch infotainment screen for the higher variants, while the lower versions could get a smaller unit. The dashboard will be fully digital and the steering wheel is similar to that of the Seltos and Sonet, with multi-function buttons for audio and voice commands, among others.

While Kia hasn’t announced any details on the seating options, expect the Kia Carens to be available in 6- and 7-seat configurations. Engine options are expected to include a pair of 1.5-liter gasoline and diesel engines also used by the Seltos.

The Carens will be presented for the first time on December 16 and a launch on the market is expected before the end of this fiscal year.