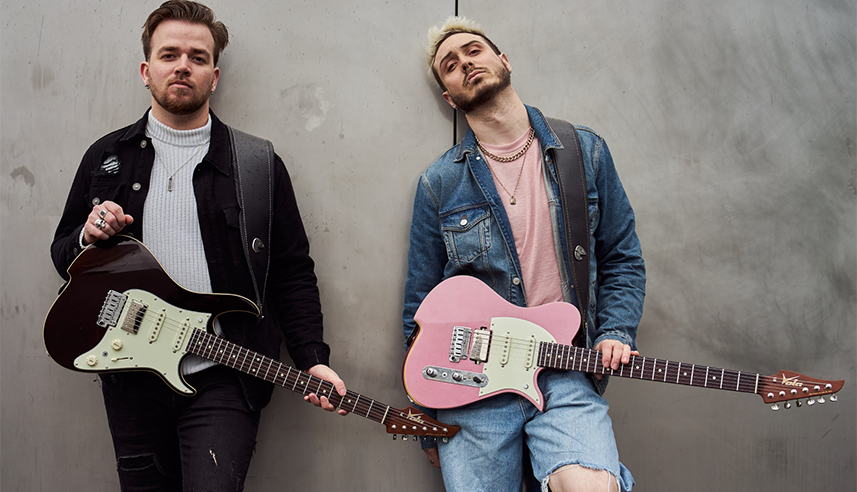 The neat axles are the latest evolution of the signature Vola guitars worn by Quentin Godet and Pierre Danel, the guitarists of French metal band Kadinja. You can see RJ Ronquillo spinning them below.

For starters, both guitars – previously only available in seven-string form – feature a mahogany body and maple top with a “Classic C” profile roasted maple neck that sports a rosewood fingerboard of 12 inches adorned with 22 stainless steel frets, and a two-way adjustable truss rod.

Tones on both guitars, meanwhile, come from a Vola Fire Ice humbucker at the bridge and a pair of Vola VS-I single coils in the neck and middle positions. It’s the control set, however, that makes these guitars stand out the most.

With a push button that activates the neck pickup no matter what position the five-way pickup switch is in, as well as a three-way mini-toggle – located between the individual volume and tone knobs on both instruments – which can be switched between series, parallel and coil functionality, there’s a lot of tonal versatility at play on these axes.

The hardware, meanwhile – from the bridge to the locking tuners – is Gotoh all around.

Their release comes a month after the unveiling of Vola’s OZ RV TNC model, which notably features a fan-shaped pickup layout.

For more information on the models, visit Vola’s website (opens in a new tab).