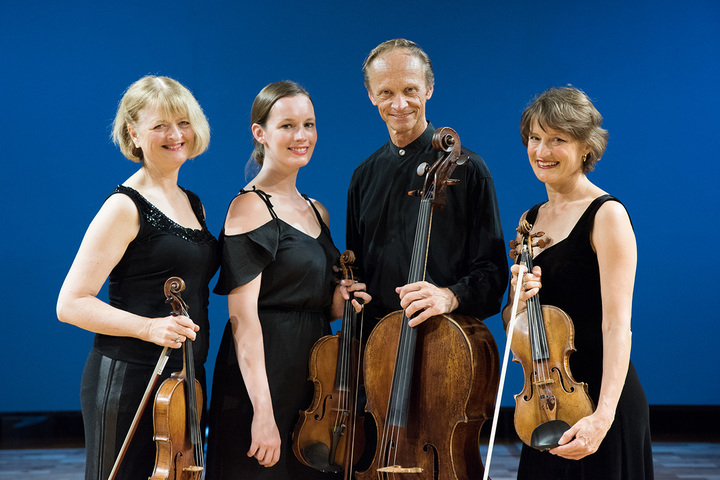 Hobart audiences love the New Zealand String Quartet, and tonight’s concert did not disappoint. The quartet has been together for 35 years and it shows in the unified performances and the immaculate ensemble. Hobart Town Hall is renowned for its resonant acoustics which can lead to lack of clarity and difficulty in projection for interior voices, but there were no such issues tonight. The quartet produced a richly blended sound that nonetheless contained exceptional vocal clarity – a truly exceptional achievement.

Op. by Haydn. 20, No 4 Quartet is the fourth in his series of six ‘Sun’ Quartets. Both opening movements have serious intent and were executed with understated simplicity, allowing the music to speak for itself without interference from the performer. Beautiful, elegantly shaped sentences were punctuated with occasional characteristic quirks, but I felt a little disengaged emotionally. The most outgoing Allegretto alla zingarese and Presto scherzando were interpreted with verve, virtuosity and humour.

Shostakovich’s second string quartet was the highlight of the evening for me. The composer’s signature sardonic and chilling subversiveness is toned down in this work, allowing his lyricism to shine alongside passages of driving rhythmic force. The quartet was written towards the end of World War II and this, combined with Shostakovich’s music defying a repressive regime, made its performance particularly poignant in light of current events. This performance had it all: passion, virtuosity, energy, a wonderful palette of colors and a comforting sense of communication between the players. I loved the haunting, improvisatory quality of the second movement’s first violin, though the magic of the underlying chords was occasionally marred by slight intonation and ensemble issues (which could perhaps be attributed to the coldness in the room). The viola has a lot to say in this quartet, and Gillian Ansell offered a unique quality of tone and nuance that will stay with me for a long time.

Gareth Farr’s short quartet, Te Kōanga, was an unexpected delight. The work was written in memory of Ian Lyons, the luthier from Wellington who looked after the musicians’ instruments until his sudden death in 2015. His performance therefore had emotional significance beyond the music it -same. A veritable dawn chorus sits alongside lyrical depictions of long nature walks, and the piece is a celebration of the rebirth that comes with spring. This work was, in my opinion, contemporary music at its best – it stirred my soul.

Smetana’s second string quartet was written at the end of his life, when deafness and deteriorating mental health imbued his music with turbulence, nostalgia and intense sadness. The lack of slow movement is perhaps an indication of the disturbance in Smetana’s mind, although this does not detract from the emotional content of the music. Performed with commitment and energy, it was a wonderful and unsettling end to the evening.

Apart from the Haydn, which really spoke for itself, the quartet members introduced every track. These brief glimpses of the music are some of the best I’ve heard. They offered insights that really enlightened my listening, as well as establishing a welcome rapport with the audience.

“Enjoyable” isn’t quite the right word to describe this gig – the music was about existential sorrows and joys that are heartbreakingly relevant to listeners today. I came away feeling like some of my feelings about the state of my world had just been expressed.

Future GMC Sierra, Yukon design may have been teased in sketch