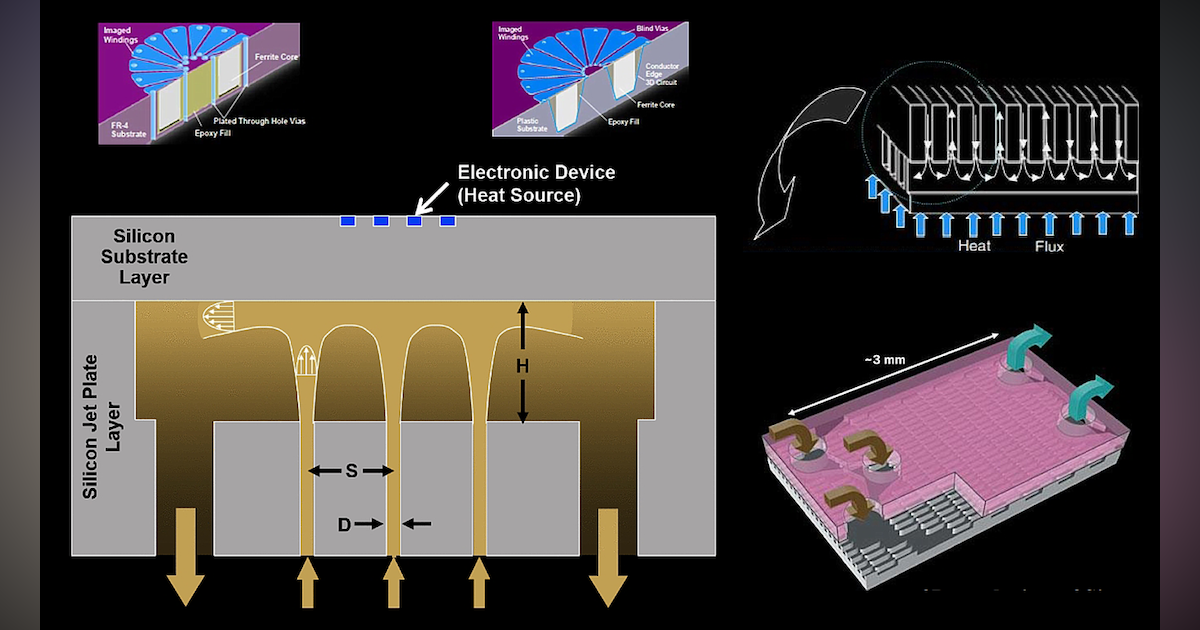 This article is part of the Power Management Series: Diving into Power Density

New and emerging technologies for 3D packaging are being deployed at the printed circuit board (PCB) level. Power density goals can be simplified by integrating components into chip-scale packages that use stacking techniques, integration, transposers, and more. Advanced cooling methods will help make 3D packaging a viable option.

Current technology allows elements such as active and/or passive components, magnetic elements and integrated filters to be integrated into the printed circuit board.

Texas Instruments’ MicroSIP was the first commercial DC-DC converter produced with the HERMES “face-down approach”. The HERMES project aims to integrate active matrices, facing up or down (flip chip), and passive (thin) components inside the dielectric layers of a PCB.

Increasing power density in power electronics designs will require better cooling techniques in the future, such as integrated cooling. Temperature control of power components is crucial for device reliability and performance. However, innovative thermal management of power electronic systems is a major bottleneck for power densification.

There are two methods for integrating capacitors into 3D structures:

There are two ways to integrate inductors into 3D structures:

These types of coolers can be integrated directly into the substrate or chip and will provide localized heat removal at high volumetric rates from the back of active integrated circuits and power electronic devices. (Fig.2). They can be used in many forms; for example, single-phase or two-phase, silicon or ceramic and different alloy substrates, filter size, working fluid, fluid velocity and temperature.

A series of parallel microchannels can have a collector oriented perpendicularly to distribute the flow (Fig.3). A micro-grooved surface is made of monocrystalline silicon carbide (SiC).

Adequate thermal insulation of power supplies from each other

The 3D integrated power electronics will use new packaging technologies. The reliability of these cooling methods is still being understood and modelled.

Immersion cooling has become a solution to overcome obstacles, such as single-phase cooling, by a method of boiling a coolant directly from the electronic components. This will help eliminate the need for most thermal interface materials and packaging constraints found in many other approaches.

Improving the power density of advanced electronics, and in particular gallium nitride (GaN) high electron mobility transistors (HEMTs) in RF power amplifiers, presents a major challenge in thermal management . The high heat transfer capability of microjet impact can be used to bring cooling directly to the back of the power electronic device (Fig.4).