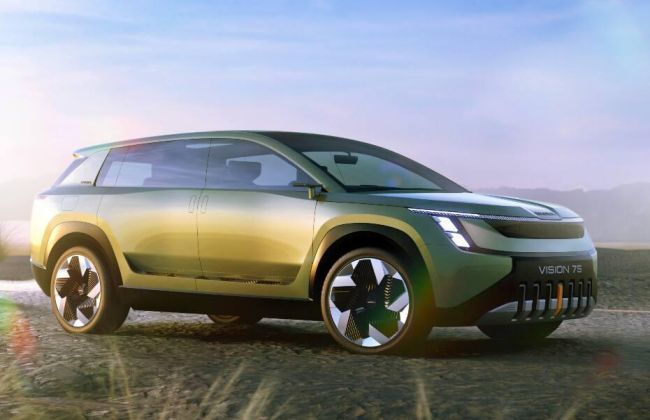 The Czech car brand has a new font, 2D logo and more robust design language for the future

It was only a matter of time before Skoda got an identity refresh for the coming era of electrified mobility and that was it. The Czech automaker launched its new logo and future design language with the Vision 7S concept study.

What is the new Skoda identity?

Like many brands, Skoda decided to flatten its 3D logo into a 2D design that would be better suited to the digital space. It is still immediately recognizable as the Skoda winged arrow. But the biggest change comes from the new Skoda wordmark font. It no longer features the caron above the ‘S’, but the so-called háček is now integrated into the style of the first letter. The wordmark should be used more widely than the 2D logo.

Even before entering electrification, green was part of the Skoda brand identity. Now it will use two hues – emerald and electric green – to represent its sustainable vision for electric mobility.

The Vision 7S concept features Skoda’s new design language, titled “Modern Solid”. Looking at the front and rear bumpers that resemble the reinforced chin guard in a warrior’s helmet, the name seems apt. The Vision 7S looks quite rugged with its chunky cladding elements that run all the way around, but also modern with its sleek T-shaped headlights and taillights.

Since electric vehicles don’t need grilles, Skoda has found a new way to continue its iconic design details in the form of a black element called Tech-Deck which houses the various sensors of the assistance systems. driving on board. In profile, the Vision 7S is simple but sharp with the pillars and roofline. It retained sporty details such as the sharp hood creases and the integrated roof spoiler. Like most forward-looking EV concepts, it features cameras instead of ORVMs for better aerodynamic efficiency.

This is what future Skoda cabins could look like

The interior of the Vision 7S concept is also characterized by a healthy use of sustainable materials. It also gets a new design language for the three-row cabin. The dash moves away from the driver, making it more spacious, while the star attraction is the 14.6-inch rotating touchscreen in the center for the infotainment and vehicle management systems. As a concept, the Vision 7S sports an oblong/rectangular steering wheel and a sleek 8.8-inch digital instrument cluster. There are no visible AC vents, but they are discreetly housed in the dash to gently diffuse cooled or heated air.

The concept SUV features a floating center console supported by support pillars positioned between the seats. At the front, it houses various touch controls, but luckily Skoda has retained many physical controls as well. The most striking elements are the three rotating dials with integrated displays. The outer dials control the dual-zone climate control while the center dial helps navigate the infotainment screen. Plus there’s a further range of touch controls behind the dials – a rocker switch for drive/relaxation modes, a rocker switch for central locking and a scroll wheel for volume adjustment. Finally, behind all those physical controls is a wireless magnetic charging station for your phones. There are various other magnetic pads around the cabin that can be used to store specially designed items.

While the Vision 7S name implies it’s a seven-seater, Skoda designed it more as a 6+1-seater. There are captain’s chairs in the middle row and two folding seats in the back, ideal for young children. The seventh “seat” is a dedicated child seat integrated into the floating center console, slightly set back from the two front seats. It is installed in the opposite direction of travel, facing the middle row, and Skoda claims that the child seat is optimally positioned for maximum safety. Although innovative and interesting, it is unlikely that this design feature will soon find its way into a production vehicle.

Technical details of the Vision 7S

Skoda has built this three-row electric SUV concept on the VW Group’s MEB platform which fits an 89kWh battery. That would be enough for a range of over 600km in the WLTP test cycle and it has a fast charging capability of up to 200kW which should fill the battery by around 10-80% in around 30 minutes.

The 7S is a fairly large SUV measuring 5016mm long with a wheelbase of 3075mm. It also has a decent ground clearance at 242mm on its 22-inch wheels.

When will it be launched?

Well, the Vision 7S concept itself isn’t intended for production, but it will surely be the basis for Skoda’s next flagship electric SUV. Since it features Skoda’s new design language, we expect many elements such as the Tech-Deck and new lighting elements to be incorporated into the production model. Skoda has confirmed plans to launch three new EVs by 2026 – a small EV, a compact SUV and a seven-seater SUV.

Currently, its only EV offering is the Enyaq iV in standard and coupe form. Skoda said it has delivered more than 70,000 units of its electric SUV globally and order books are still full as the automaker tries to stay ahead of global supply shortages. We expect Skoda to also introduce the Enyaq iV in India as a CBU import model.