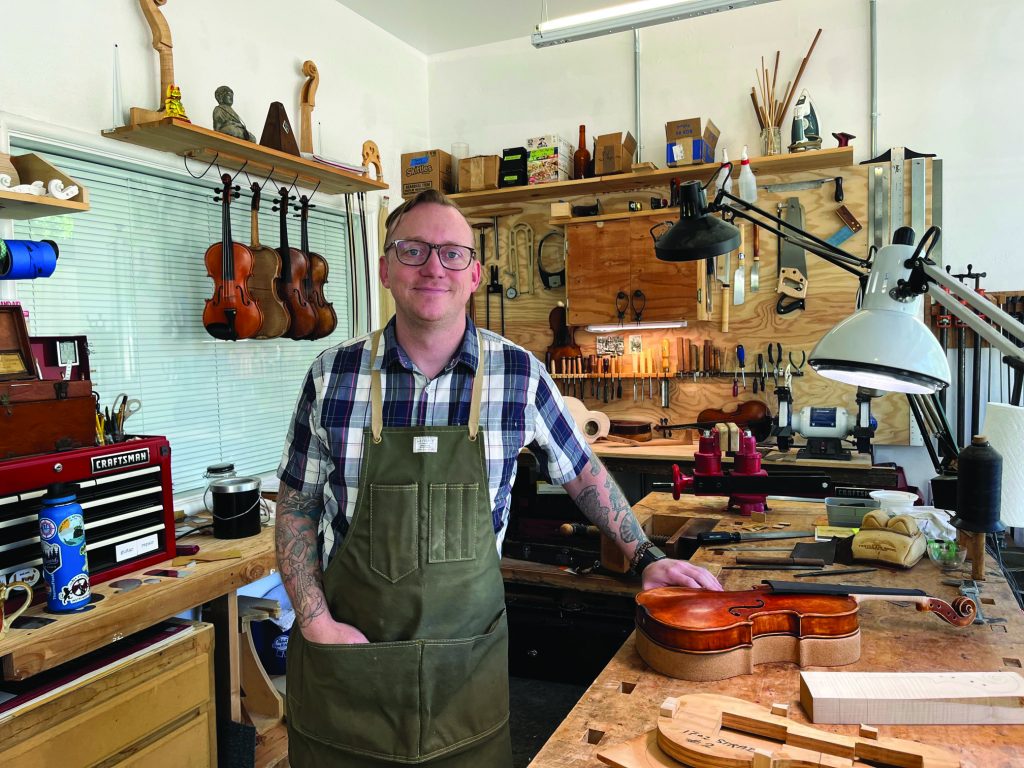 Ryan Davidson is in love. Perhaps obsessively, he admitted one recent morning as he stood behind his workbench surrounded by the objects of his affection: violins, in all states of construction and repair, pencil sketches on from wooden planks to complete instruments ready for sale.

“I don’t know if ‘obsessed’ is too strong a word,” he says, the gleam in his eyes and his effusive words confirming that it isn’t, “but I am absolutely captivated and compelled by them. They’ve had 600 years to evolve into these amazing things…. They’re perfect acoustic machines.

After flirting with violins for more than a decade, Davidson – a staple of the local music scene whose original music is loaded with country, rock and Celtic influences – has recently taken the plunge and signed on full-time. in the instruments. In January, he opened Davidson Strings on Humboldt Avenue in Chico. While he gladly accepts other stringed instruments in need of repair and maintenance, the store’s primary focus is to sell, repair, and build violins (and their larger cousins, violas and cellos).

Davidson explained that the store opening was a pandemic pivot, inspired by both necessity and soul-searching. It is also the last chapter of a love story that began years ago, in a distant land.

As of 2010, Davidson was living in Ireland, earning his master’s degree in ethnomusicology at the University of Limerick. His main area of ​​study was Irish music and instruments (organology); During his research he discovered “an amazing little luthier’s shop” in Galway and was bitten by a bug to start building his own instruments. After graduating, Davidson apprenticed under shop owner Paul Doyle.

Over the next decade Davidson built several Irish guitars and bouzoukis, but never attempted to build a fiddle. He is an accomplished multi-instrumentalist, however, who has said his love of the violin has come to eclipse that of other instruments.

Before the pandemic, Davidson was busy recording, touring, playing regular shows, and teaching various music and recording classes at Nord Country School and Butte College. He also had a small workshop out of sight in north Chico where he repaired instruments. COVID-19 has wreaked havoc on all of these businesses.

“I went from 11 classes to one in a single day,” he said. “I thought it was time for the store to start making money, and I took the plunge.

“Over the years, I slowly moved into violins,” Davidson continued, “and realized that no one was really doing that work locally. There was a guy in Redding who retired after the [Carr] Shoot there. I started to learn violin work properly with a guy named James Wimmer [owner of Violin Wise] in Santa Barbara.

“It was a great experience. Basically, he said, ‘Oh, you want to start playing the violin? Here is everything you need. He was an incredible mentor.

Davidson explained that his shift to violins was not entirely a matter of infatuation and survival, but that there were deeper reasons behind the change as well.

“With the re-evaluation of his life that accompanied the pandemic, I started to really look at the history of guitar making, and there are some things that really pissed me off,” he said. “A big problem is [guitars being mostly made] with tropical hardwoods from Africa or South America. The world has been hyper-focused on these woods since the days of colonialism.

“In Europe, they had been making instruments from native woods for hundreds of years. All of a sudden they went somewhere else and said, “Wow, look at that wood… let’s take it all! It led to clear-cutting of forests and all kinds of terrible things.

Plus, many of these tropical species are downright dangerous to work with, Davidson said. As examples he cited Indian rosewood (“The dust sticks to your lungs and never goes away”), ebony (“it’s extremely carcinogenic and like little razor blades that you breathe”) and snakewood (it’s actually poisonous and will poison your blood”).

He said that other common guitar woods had almost disappeared and only old samples were available, at high prices.

“I don’t want to hunt the newest tropical hardwood, knowing the wood wants to kill me,” Davidson added.

Violins, on the other hand, are made primarily from maple and spruce. He noted that European builders – after 600 years of using the same “recipe of wood” for violins – conserved and tended forests to ensure the sustainability of these sources.

This long history is part of what Davidson loves so much about violins.

“They had time to evolve; guitars are babies in comparison,” he said. “The history and evolution of these instruments, the knowledge base that we’ve built around them, it all really speaks to the academic part, the musicologist, in me.”

Taking pride of place at the center of Davidson’s workbench during the CN&R visit was one violin in particular, its aged finish making it look like an antique instrument despite being brand new, still stringed. .

It was Davidson’s first fully soloed violin build, inspired by a 1702 Stradivari. two dozen times to create the aging veneer.

“Antiques take a lot longer [than normal varnish],” he said. “It’s like giving a baby a fake ID.”

A week after the visit, Davidson’s first violin was finished. To celebrate, he called his friend and fellow local violinist, Phillip Harrold, to come hear him sing for the first time. Harrold joined him for a few songs on an instrument built by Davidson’s luthier mentor, Wimmer, creating what Davidson called a special “master-apprentice moment”.

“If you had told me two years ago that this is what I would do, I would have said, ‘You’re crazy,'” Davidson reflected on his journey into the art of the violin. “Life sometimes has its own way of unfolding, getting better and more interesting.”

Discovery’s design team handled the leap into the future

Regionalize your supply chain: The closer, the better