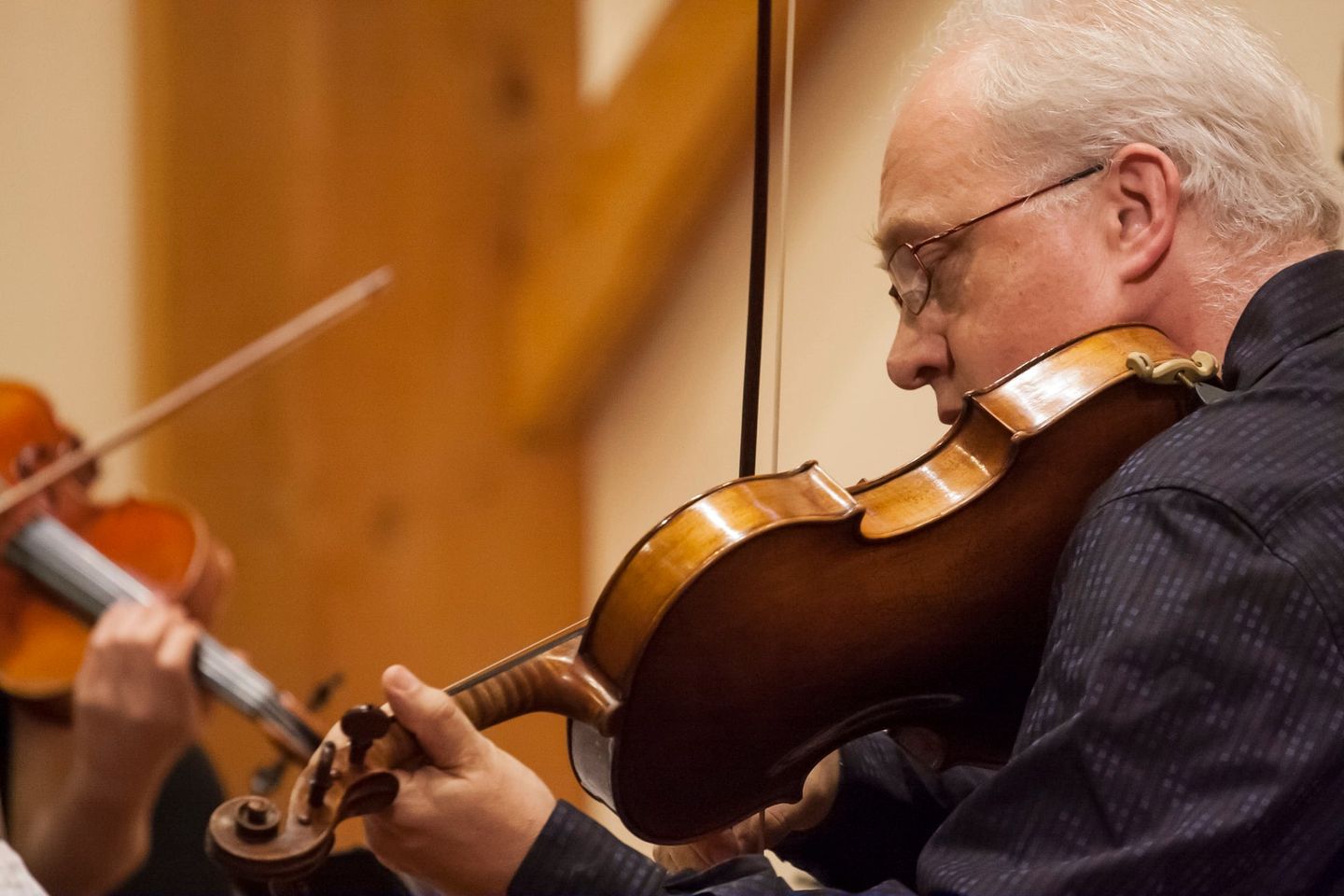 Josh Weilerstein: The first time I heard Roger Tapping play was at a performance of the Ravel String Quartet at the Yellow Barn when I was a teenager. It was an unforgettable demonstration of all the principles of chamber music that anyone could strive for. He was listening, directing, giving, taking and so much more, and his performance that night was all I could think of for weeks. It certainly played a role in my decision to become a musician. Little did I know that this chamber music genius would turn out to be one of the most brilliant, genuine, and deeply kind humans I would ever meet.
It is impossible to quantify what Roger meant to so many musicians around the world, whether inspiring them through his playing or through his remarkably detailed and in-depth chamber music coaching. In particular, I remember coaching on the first movement of Beethoven Opus 132 where we didn’t get past the first 8 bars for almost an hour, and yet we didn’t mind, because while we were trying to Exploring the depths of this monumental piece, Roger led the way with supreme patience, taking us as close as possible to the heart of the music. His playing, his musical insights, his brilliant intelligence, his wit, his curiosity, his quiet tenacity, but above all his kindness, make this loss such an acute pain for our world. If you were lucky enough to meet Roger Tapping, you became a better person in every way after meeting him. He will be deeply missed and forever remembered by so many.

Jaime Clark: The loss of Roger Tapping is such a devastating blow that it robs us of our ability to breathe.
Every time I bring my hands to touch my instrument, I am reminded of the concepts he has shared with me over the years. Our conversations for the interviews for my NEC thesis revealed a miraculous and magical human being like no other. I found myself wishing he never hung up on the other side of the line.
He often spoke of trusting our own instincts, of creating forms in the most human way. He encouraged us not to treat the score as a secret, abstract code, but rather with the assumption that we can understand it deeply and relate to it on a human level.
He emphasized the importance of asking simple questions while identifying with an exceptionally high level of imagination when it comes to meaning and character.
He knew how to marry simplicity and depth and his presence illuminated each room. I am at a loss for words and thinking of his dear family right now.

Keats Dieffenbach: There are a few friends in my life who I have felt truly seen by – Roger Tapping is one of those dear people to me.
During my last summer at Yellow Barn, I requested the great Schubert G Major Quartet, D887 and was delighted to learn that Seth had not only programmed it but put me in a band alongside Roger. D887 is Schubert’s last string quartet, published posthumously. The piece is deep and transcendent (and 50 minutes long!), and the experience of playing it with Roger was nothing short of that. (I cherish being one of a small number of people who had the honor of accompanying him on this otherworldly second theme….)
It makes me sad that I can’t remember more of his comments about specific moments in the score – it’s all just a giant blur of swirling sound and the sacred communion of bringing such a monumental work to life. After five intense weeks of in-depth work on this piece that meant so much to both of us, we were definitely bonding and exchanged knowing nods that recalled the depth of experience each time our paths crossed for years thereafter. .
What I do remember is that in that fateful summer of 2008, both by instruction and by impeccable example, Roger patiently showed me how to blend into his incredibly special sound, how to set value the inner voice, how to sustain the first violin without dominating…basically everything you need to know about playing the second violin. I will never forget him, and I will carry the singular and profound joy of knowing Roger and making music with him – that incredible gift that anyone who has ever spoken with him, played with him or heard him play instantly recognizes – I will carry that joy alongside the gift of his friendship as long as I live.

Mei Rui: The world of classical music has lost a giant today. You always called me a strong woman, but I couldn’t help shaking and sobbing since I spoke to Seth this morning…
Dear Roger, thank you for all the memorable and life-changing musical experiences, inspiring conversations and delicious whiskey tastings. Having you as a mentor, collaborator, coach, friend and ping pong buddy for the past 14 years has been one of the greatest privileges and blessings of my life. I’ll listen to our Berg and Brahms with a tall glass of whiskey tonight.
My heart goes out to Natasha and all my friends Yellow Barn and PMP who are grieving and hurt by this unfathomable loss 💙

Side by Side: Discover the Common Ground Between Sound and Design at the Design Museum of Chicago