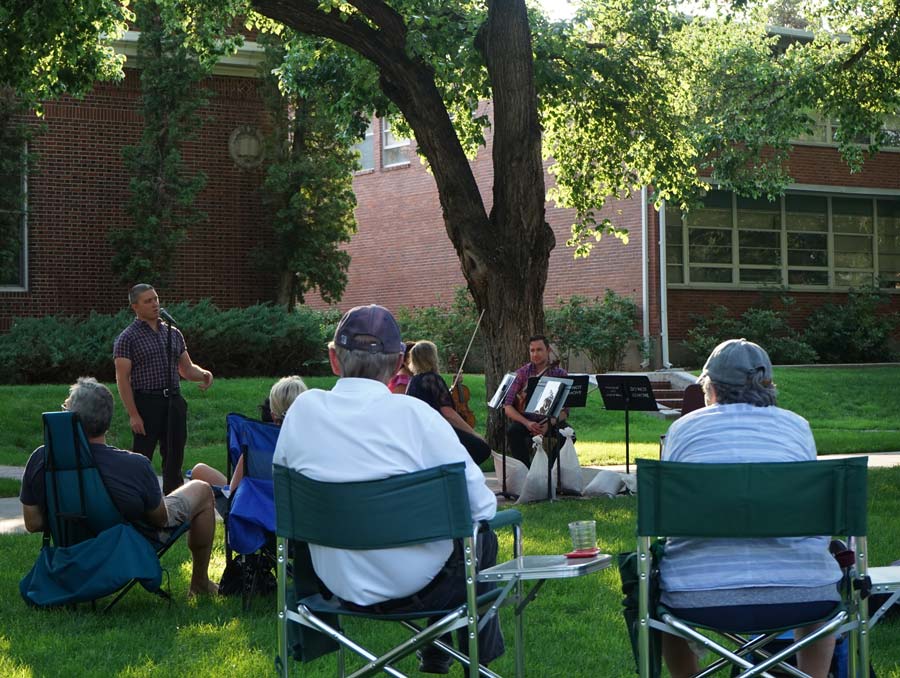 String theory meets music theory at Artown on the Quad

As temperatures soared into the 90s on the evening of July 12, four musicians linked to the University came together to mimic the way physicists imagined the forces of the universe coming together. The String Theory Quartet, which performs as part of Artown, Reno’s month-long celebration of the arts, consists of two former students who are also siblings, a former student-turned-teacher and a current instructor.

The quartet’s cellist is Johnny Lenz. Johnny’s father is John Lenz, a renowned former music teacher who played cello and horn and performed in the University’s Trio Argenta. At the start of the show, Johnny played with the tuning of his cello. The quartet had tuned their instruments and rehearsed inside. He thought the heat might impact the instruments, but the same heat caused the quartet to retreat to the air-conditioned indoors before the concert.

“Every material on Earth has a rate of thermal expansion and contraction, including our strings. As they get longer, the tension in the strings decreases and they flatten out. In the case of my cello , it goes flat,” Lenz said. While at the University, he studied fine wire resonance. “I was pretty good at music, but I was also really good at science and physics. .”

The former physics student inspired one of the violinists to name the quartet “String Theory”, a reference to the theory of how the forces of the universe impact everything in it. Johnny Lenz was a Westfall Scholar when he graduated in the fall of 2006, meaning he had the best GPA of any physics student that semester. He has been a musician for 33 years.

“The idea behind string theory, and it’s been a long time since I went to school here,” Johnny says, gesturing around him, “but it’s unification. You’re trying to unify the different quantum mechanics, classical mechanics, relativity, you’re trying to unify it all to make sense. And that’s one of the reasons we thought it would be good for a quartet is that we’re trying to unify and blend the different strengths of the musical family and the string family. Ironically, Johnny has always been skeptical of string theory, although his studies focused on experimental physics rather than theory.

There aren’t many experimental physics jobs in Reno, but Johnny didn’t want to leave the area, so he got a job with the Douglas County Sheriff’s Office in law enforcement. Sergeant was shot while on duty in December 2020. In honor of Johnny’s recovery and return to the stage, the Reno Philharmonic Orchestra offered free virtual access to first responders for a virtual concert in February 2021 and brought 30 friends, colleagues and family members to the Pioneer Center for an in-person concert.

Johnny’s sister, Ruth Lenz, is concertmaster of the Reno Philharmonic and Reno Chamber Orchestra and is also a member of the Classical Tahoe Orchestra. Ruth plays the violin and holds a doctorate in music performance. She attended college to earn her degree in music. Jessica Escobar, another violinist, taught anthropology and French at the University and graduated. Escobar came up with the name of the quartet. Dustin Budish, the group’s viola, teaches viola at the university. The band played a diverse mix of music, from The Rolling Stones’ “Paint It, Black” to “We Don’t Talk About Bruno” from the Disney movie Encanto to “Promentory,” the Scottish-inspired main theme from the movie “The last of the Mohicans.”

“It was really fun and it was good to be here,” Johnny said. Despite thermal expansion affecting her cello strings, the performance received a standing ovation at the end. The event, sponsored by the University and the Edna B. and Bruno Benna Foundation, was the second in a series of free public Artown events called Artown on the Quad.