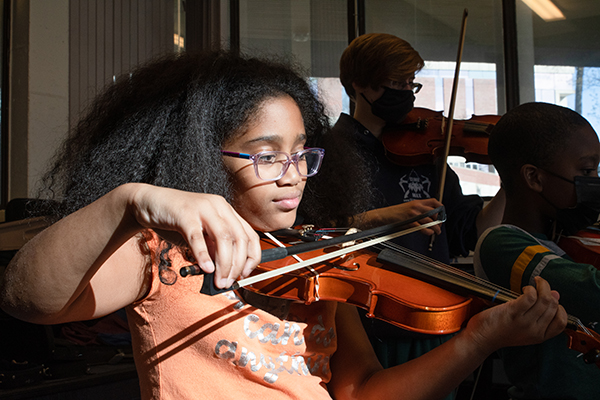 Josh Santana ’20, ’22, from Lowell, fell in love with the violin at the age of 7 after hearing a solo violin performance on television.

“The sound was just miraculous, beautiful,” he says. “I wanted to be a fiddle star, like on TV.”

The following fall, he joined the UMass Lowell String Project, a music education program open to any child in grades two through twelfth, then in his second year. Santana showed talent and dedication right away – and led the debuting ensemble at the Spring Showcase concert.

He never looked back. He quickly rose through the ranks of the String Project ensembles, while learning to play the clarinet. While earning a bachelor’s and master’s degree in music performance and community music education at UMass Lowell, he gained teaching experience as a “teaching artist” with the String Project and ultimately as a co-conductor. conductor of his Lowell Youth Orchestra, the most advanced ensemble.

Santana says her experiences in the String Project have been joyful and creative.

“As a kid, the way I always enjoyed music the most was through the String Project,” he says. “It was communal. There were no educational standards that we had to meet, but we all improved so much.

More than two decades after its launch, the UMass Lowell String Project continues to bring accessible, high-quality musical and instrumental education on the violin, viola, and cello to school children in the Lowell area – and to empower UML music students valuable teaching experience. And teacher artists like Santana are passing on a legacy to the next generation of budding musicians.

Part of a national effort, the String Project originated at the University of Texas at Austin in 1948. National String Project Consortium now includes 39 programs at colleges and universities across the country. The goal is to train excellent stringed instrument teachers while providing affordable music education to children and adults from diverse communities.

The UML String project was led by music teacher emeritus Kay Roberts until her retirement; Greher took over as director of education in 2013. Allyn McCourt ’15, like Santana a “graduate” of the String Project and UMass Lowell, is part-time executive director and conductor of the Lowell Youth Orchestra.

About 100 children join one of five String Project ensembles – Prelude, Overture, Accelerando, String Sinfonia and the Lowell Youth Orchestra – each year. They learn to play string instruments in bi-weekly lessons and rehearsals.

Although the numbers have dropped in the 2020-21 academic year due to the COVID-19 pandemic, Greher, McCourt and UML students who serve as teacher artists have found ways to keep learning , in particular by offering individual online courses.

Sophomores with the String Project are taking a creative sound acting class, and during the pandemic, they’ve been creating music for videos of one-act plays written and performed by students from Free Soil Arts Collectivea local theater ensemble and an educational program.

“They were able to explore all the different sounds their instruments could produce. It was really fun for the kids,” says Greher. “They are very, very musical kids – very precocious and willing to take risks.”

Classes and in-person rehearsals have returned in the past academic year, and Greher expects the String Project to be fully booked again in the fall. It also plans a belated celebration of the 20th anniversary.

Undergraduate students in UML’s Introductory String Pedagogy course gain what is often their first teaching experience by pairing one-on-one with beginning students in the Prelude ensemble of the String Project. Other students are paid to teach, such as Rachel Janielis, a music studies major from Wakefield, Massachusetts, whose main instrument is the cello.

Janielis says she received a scholarship at UML that required her to teach in the String Project, but she loves it so much she would do it anyway.

“I really like teaching children. They’re all eager to learn, and it’s really fun to see how they progress over the year,” says Janielis. “The String Project teaching experience will strengthen my skills.”

Finding out that UMass Lowell also has a String project was “a happy coincidence” — and she says working with the ensemble gives her more experience in support of her goal: teaching music in low-income communities.

Parents and family members say their children look up to the students.

Irma Ortiz’s 9-year-old granddaughter, Daniella Nuñez, heard UML students from the String Project perform at her school two years ago and told her mother she wanted to learn the violin. She’s now in her second year with the String Project and loves performing for her family, Ortiz says.

“Her dad lives in Ohio and she plays for him on Zoom, and for the December gig, her whole family flew out here so they could come,” Ortiz explains.

Tara Chin, who emigrated from Cambodia with her family in 2013, says her 8-year-old daughter enjoys watching YouTube videos of classical violinists and “wants to play like them”. So when the little girl brought home a flyer for the String Project from school a year ago, Chin signed her up.

“I love music and she loves music, but I didn’t have the opportunity to study music in my country,” Chin said. “My daughter really likes it, and I’m going to push her, motivate her and support her every year until she learns to play everything.”

Penny and Herminio Sanchez say they enrolled their son four years ago at the suggestion of his music teacher at Murkland School in Lowell. Their son, now 12, suffers from autism spectrum disorder and anxiety, his mother says. Through the String Project, he found a supportive community and friends, the motivation to study piano and guitar in addition to violin, and a role model: Josh Santana.

“Josh has been a great mentor to him,” Sanchez says. “He praises Hermie and gives him the encouragement he needs to stick with it.”