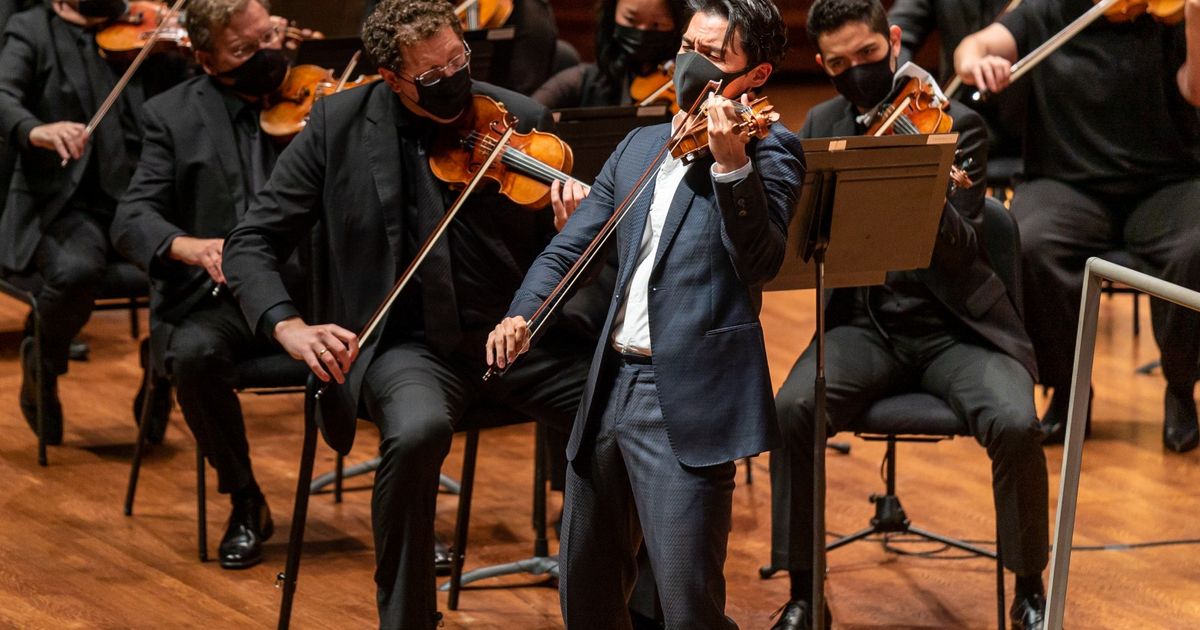 What do you do when you play a touching violin solo in front of a concert crowd and a string of your instrument suddenly breaks?

That’s what happened with violinist Ray Chen, who performed Thursday night with the Seattle Symphony. He was on stage at Benaroya Hall, playing Tchaikovsky’s Violin Concerto, when one of the strings of his instrument broke. He momentarily tried to continue, glancing at conductor Ludovic Morlot, before quickly swapping violins with solo violin Noah Geller, then playing to the applause of the audience.

Meanwhile, a violin repair took place on stage, as Chen’s instrument was handed over to violinist Mae Lin. During a break from Chen, he gave Lin an extra violin string he was wearing, which replaced the E string.

You can watch the incident here (the chain break occurs around the 19 second mark, when you can hear a snap):

Chen played the rest of Geller’s first movement on Geller’s violin, before receiving his repaired instrument – a Stradivarius – return, and playing the rest of the concerto on his own violin.

Chen later said that violinists know that string breaks can happen and that once that happens, what goes through the performer’s mind is whether they can transfer the string with the first violin (the main violinist) and what is the best place in the room to do it. to be, according to Seattle Symphony spokesperson Dinah Lu.

Chen believes the rope break is due to extreme climate and environmental changes – being very humid outside and dry in training halls, as well as his recent trips from a drier climate in California to a plane to Seattle colder and wetter, Lu said. Such changes put tension on the ropes.

Although violin strings that break in the middle of performances don’t happen often, Chen always wears an extra E string. – the thinnest rope with the highest tension – in his pocket during performances, Lu said.

The entire concert on Thursday is available to stream on Seattle Symphony Live by subscription until November 11. Chen, meanwhile, is set to play two more concerts with the Seattle Symphony on Saturday and Sunday.

Have you ever had a chain break?